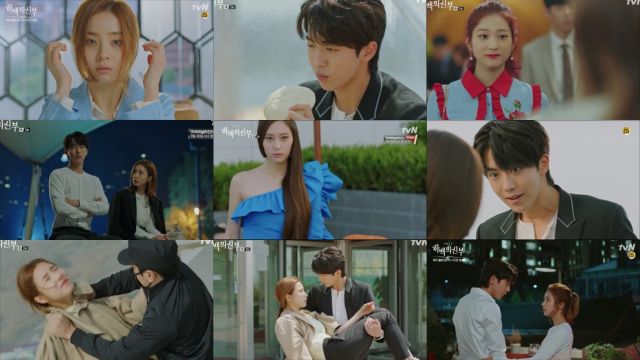 So right away we get a hint both of why So-ah's ancestors would agree to be the human guides for the Water God and also how they're punished should they refuse. Magic powers. And there really is something demented about the way So-ah is tortured for most of this episode considering that she, herself, works in psychiatric care. Soo-ah's only hope is to ask for advice from her eccentric friend Yeom-mi (played by Choi Woo-ri) and hope for the best.

Incidentally, I find it odd how the alleged second leads in "Bride of the Water God 2017", rich guy Hoo-ye (played by Lim Ju-hwan) and actress Moo-ra (played by Krystal) constantly seem to be of such little importance. I mean, we know they're going to matter eventually, especially Moo-ra, who has an important role to play in regards to Ha-baek's inheritance. It's just, in the short term, the main purpose of these characters is for Soo-ah to lose her marbles in front of them and act very unpleasant.

I'm still having trouble sympathizing with So-ah as a character. While Ha-baek may well be a genuinely very unpleasant person to be around, So-ah has nothing else going on right now. Even without the magic penalty making So-ah even nuttier than usual, this is a woman with no prospects in life. I can only hope that following the cliffhanger So-ah starts making a better effort to be engaged in the story.

Like Ha-baek. He's trying. Ha-baek is admittedly not doing a very good job. In fact, he's basically a homeless person, while Soo-ri tries to scrap together the meager money they need to each cheap food. But Ha-baek's sense of constant dignity and confusion is actually pretty funny just on its own merits. He really does struggle to understand the most basic aspects of how the human world works, and I like seeing just how alien and bizarre the most basic ideas of modern life are to him.

After all, people from just a few decades ago would find even the basic necessity of cell phones to be frankly bizarre. This is how, for all his haughtiness, Ha-baek has become a genuinely relatable character. I do want him to succeed in his goals, even if I don't have the slightest clue how he's supposed to go about accomplishing them. But So-ah? I still don't really know about her. Sad flashbacks alone does not an engaging character make.