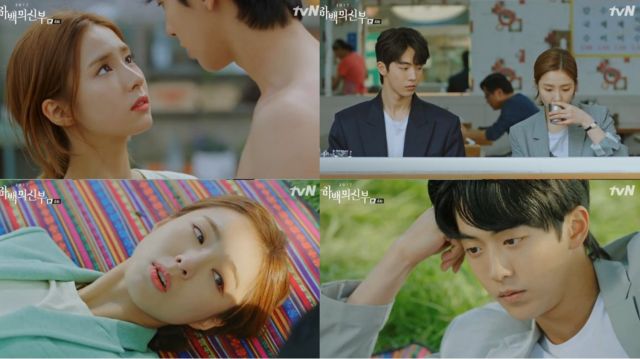 It's really uncanny how the more I see of So-ah the less I like her. For a sense of perspective, the last cliffhanger featured her being thrown off the top of a building by a crazy person, and getting her life magically saved by Ha-baek. Yet rather than respond with gratitude for this heroic, if self-interested act, So-ah gets right back to the usual negotiations. How in the world can we root for a story of unconditional love when So-ah insists on attaching conditions to everything?

I can't tell whether this is supposed to be a character flaw or if its supposed to be endearing. "Bride of the Water God 2017" seems like it's playing it both ways, because So-ah's personality is the main obvious cause for nearly all of her problems in life. Yet for other moments, like with the phone scene, I get the impression that we're supposed to think Soo-ah is smart for being deceitful, even as she immediately blows away her good as yet unearned fortune on a small party.

It especially doesn't help that even in flashback, where So-ah is explicitly a child in a bad situation with good excuse to be generically mad at people, So-ah still goes out of her way to be a jerk. Worse, child So-ah acts like a jerk to other children who are trying to be nice to her and do not in any way deserve to be treated like this. Adult So-ah is only a mild improvement over this which leads me to wonder- whose side are we supposed to be on?

If the purpose of all this is to make us like Ha-baek more, well, I guess that much has been solved. While still nowhere near showing humility Ha-baek is at least acknowledging that he is facing some massive shortfalls when it comes to the most basic tasks in the human world, and is trying to learn how to do better. So why is So-ah being so dismissive of him, when Ha-baek has already improved substantially in a short period of time?

The second leads are also a sore spot for me. Moo-ra, like So-ah, is a genuinely unpleasant character, although her more useful skills and willingness to do favors at least manage to justify the woman's presence. As for Hoo-ye, he's straight up a blank slate with little to no obvious personality features at all. Which consequentially manages to make the women characters look even worse when they interact with him.