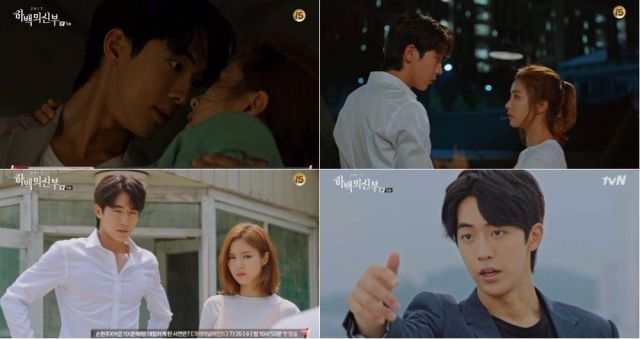 The more I watch of "Bride of the Water God 2017" the more baffling the worldbuilding becomes. Observe how Ha-baek, for all his general ignorance about how most of the human world works, apparently easily understands concepts like skateboarding, motor vehicles, cooking Western style food, and closed circuit television. Elsewhere, Ha-baek does not understand concepts like how it is a dumb idea to knowingly put yourself and others in a dangerous situation.

I mean seriously, at one point a crisis is only able to resolve relatively painlessly because apparently Soo-ri is fireproof. Are the characters from the godly realm in "Bride of the Water God 2017" also invulnerable in addition to being immortal? Although even if they are, So-ah most definitely is not, so it makes no sense whatsoever for Ha-baek to throw her into a dangerous situation.

Although on that subject, I'm struggling to figure out what exactly So-ah is bringing to Ha-baek's mission at all. So-ah lacks any useful skills. Beyond that any task she gives Ha-baek and Soo-ri just seems like a thinly veiled excuse to get them to do some kind of complicated favor for her with no benefit to either of them. That is, come to think of it, all So-ah ever really does with any other character, which is why it's hard to feel sorry for her even when she's on the bad end of a life-threatening situation.

Elsewhere in the "characters who lack obvious purpose department" we have Hoo-ye, who is given personality traits this episode. First, he wants to be a comedian. Second, he used to play American style gridiron football. Third, he likes planting trees. Hoo-ye's character feels more like a dating profile than he does an actual person. I guess that's an improvement over his being genuinely unlikable, although it's a pretty mild one. Moo-ra, for example, continues to act about as unpleasantly as possible in every scene that she's in.

But the thing is, even unlikable characters would be palatable if there was some sort of obvious point to their actions, or if they were at least unlikable in interesting ways. We get a look at what So-ri and Yeom-mi were like in college and rather than know or care about the plot device they were discussing I was more struck by how they were both wearing glasses, as if this was somehow supposed to make them look younger. That kind of scene setting, like so much of "Bride of the Water God 2017", is just plain lazy.