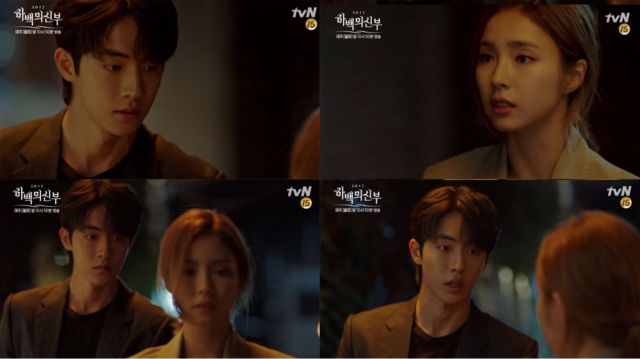 Bi-ryeom (played by Gong Myung) is, like Moo-ra, a god living in the human world who is supposed to be doing divine stuff but instead seems to engage mainly in petty bickering. Thus "Bride of the Water God 2017" continues its fine tradition of making Ha-baek a sympathetic character, not by having him engage in character growth, but by making all the other characters he talks to even more obnoxious. I guess it's working. Ha-baek is swiftly becoming the only character in "Bride of the Water God 2017" I particularly care about.

In all fairness this is definitely a balancing act when it comes to the genre. The easiest way to create an obstacle for a superpowered god to fight is by making them face off against another superpowered god. The problem with this is that supervillains are fairly dumb and childish, and we get enough of those in American media anyway. Because really, what can you do with a supervillain in the end aside from just punching it into submission?

But the issue with "Bride of the Water God 2017" right now is that Moo-ra and Bi-ryeom are playing the role of villain when they are not actually villains. They're incompetent, and occasionally accidentally sociopathic. Beyond that, though, their goals aren't that different from Ha-baek's. Indeed, if we want to look at "Bride of the Water God 2017" as more of a travelogue, the logical thing for them to do would be to ask Ha-baek to do something for them rather than get hung up on technical procedures.

Although really, all this narrative analysis is just a disguise for a more brutal critical assessment- that "Bride of the Water God 2017" is surprisingly boring. As inherently stupid as the car scene from last episode was, it did at least manage to stick out in memory as being stupid in an interesting way. This episode is just an extended series of conversations about nothing, none of which seem to move any of its characters closer to an actual goal.

I guess the love story makes progress, if you want to call it that. The problem there, though, is that Ha-baek and So-ah's relationship appears to be defined entirely by how Ha-baek is dragging So-ah into near mortal danger, and So-ah puts up with because she's trying to get something out of him. She's not really sure what. This isn't exactly the basis for a healthy romantic relationship.