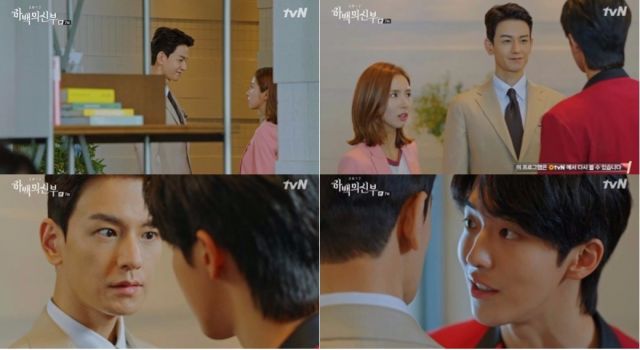 Even ignoring the issues with So-ah's personality, she's also an unspiring character on account of her sheer passivity. Time and again, rather than do anything constructive to assist in her goals or Ha-baek's, So-ah just gets unceremoniously tossed into life threatening danger and has to be rescued from her plight by another character with actual competence. Whether that competence is in the form of a gun, better driving skills, or literal magical powers, the effect is the same- So-ah just ends up feeling like dead weight.

This is also equally true of the most mundane character in "Bride of the Water God 2017"- Hoo-ye. If we were to straight up excise everything about Ha-baek and the Godly dimension from this drama, what we'd be left with is a story about how So-ah has ruined her own business and finances. Luckily the rich, intelligent, and boring Hoo-hye is there to rescue her, whether it be through explicit aid or just being willing to listen to her problems and spend time with her.

All of this is really, really boring. I'm just sort of astonished to have to acknowledge that almost all of the tension in this supposedly supernatural story is coming from a bad real estate deal of all things. It's not clear to me why ownership of the land even matters in the first place. It's not like Ha-baek needs to build a house there, he just needs to...actually, come to think of it, I can't remember why Ha-baek needs the land at all.

I keep coming back to the first episode, which very clearly and explicitly mentioned what Ha-baek needed to become emperor of the cosmos. There are the three artifacts, and the three gods living in the human world who guard the artifacts. There's also the secondary problem of how Ha-baek lost his godly powers- or did he get them back at some point? I mean, yeah, we've seen him using them, but I don't remember if it was ever explained why he lost them in the first place or how he's been using them since then.

These obviously important plot points slip my memory, yet I can recall in excruciating detail the constant exposition we get about how So-ah and Hoo-ye are sad orphans, and how Moo-ra and Bi-yeom are petty jerks who don't seem to have goals or motivation. They're just mean for the sake of being mean. Ha-baek, too, is unsatisfying by association, since there's not very much he can do about any of these annoying character traits.