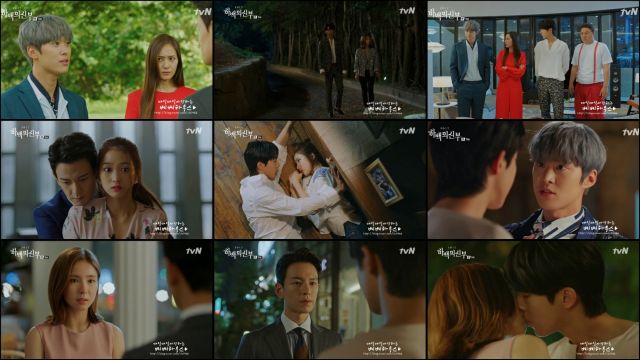 So even though Hoo-ye has been built up as being this big sinister villain character because of his supernatural backstory, "Bride of the Water God 2017" promptly undercuts this by reminding us that Bi-ryeom is a genuinely malicious person (well, god, whatever) who's fine with threatening children. It really is a badly mixed message. If Moo-ra and Bi-ryeom are allowed to enrich themselves with supernatural connections, why is it so bad for Hoo-ye to do it too?

That's perhaps the most questionable worldbuilding element at play in "Bride of the Water God 2017". The gods don't serve any obvious purpose to anyone, even themselves. They're not even an excuse for director Kim Byeong-soo to liven up proceedings with special effects. They just ramble on and on about pointlessly complex backstory and rules that lack any obvious relation to currently ongoing problems.

But then even currently ongoing problems lack any obvious relation to the greater plot. I frequently feel as if "Bride of the Water God 2017" is missing entire important establishing scenes. Take the whole bit with the amnesiac monk. It took me way too long to figure out who that was supposed to be and why Ha-baek finding him was such a big deal. No doubt part of this confusion stems from how until Ha-baek finds him, it didn't seem like anybody was even looking for him in the first place.

We're far more likely to get exposition of the romance between Ha-baek and So-ah, which at this point rather hilariously has nothing to do with the plot at all anymore. At one point, Moo-ra even explicitly asks why So-ah is in the room while all the gods are discussing plot points that have nothing to do with her. So-ah's only apparent contribution to "Bride of the Water God 2017" is that she is the titular bride apparent to the water god, even though there's no indication that Ha-baek wants or needs a bride.

The scenes between Ha-baek and So-ah do at least serve a purpose in that there is romance and jokes in these scenes, so they feel slightly less pointless than the main story. But the overriding problems in this drama remain overchanged. It's all exposition and no action. The main memorable scenes feel horribly awkward- like when Hoo-ye is confronted by a minor character whose personality appears to have changed completely between scenes. On top of all its other problems, "Bride of the Water God 2017" suffers from some rather subpar acting.