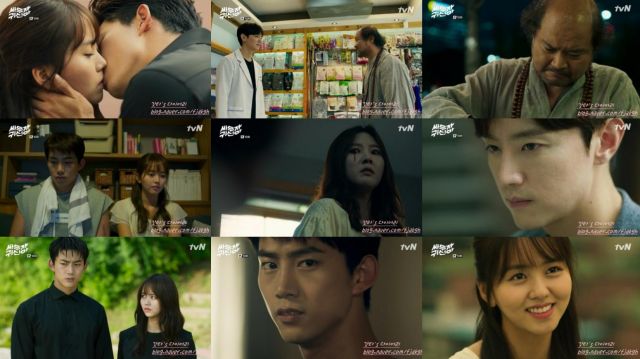 The balance and pacing are unusually spot-on this episode, as effective scene transitions let "Bring It On, Ghost" get through a lot of plot fairly efficiently. There's romantce, a ghost hunt, romance mixed with comedy, a resolution of last episode's ghost plot, then some sad self-reflection as Hyeon-ji takes in all that she's learned. What's even better, important backstory information is sprinkled throughout. The question "who exactly is Myeong-cheol anyway" is finally convincingly answered.

The main weak part of all of this remains Hye-seong. I was relieved to see that the detectives are not completely gone just yet, although their meeting with the coroner was irritating. Yes, obviously the poor kid fell from a tall building. That much was not in dispute. The question is, are his injuries consistent with suicide, and there is no possible way the answer could be "yes". Being thrown out a window would, among other things, result in him landing much farther away from the building than would be expected from a simple jump.

Granted, I'm thinking this way in part from having watched too many detective stories over my life but really, if writer Lee Dae-il-I is not going to commit to the genre seriously he shouldn't even be trying. Contrast that storyline with the genuinely surprising revelations we get regarding last episode's ghost and the backstory therein. The twists we get regarding the ghost hunts this episode are genuinely a lot of fun precisely because they shake up the template.

The thematic relevance is also a good stickler. At the start of "Bring It On, Ghost", Bong-pal was always looking for fights. But as time has worn on, he has adjusted his feelings when it comes to ghosts and has been slower to assume that violence is the solution to all supernatural problems. Bong-pal's character growth is one of the more interesting parts of his character, and it's why his inevitable confrontation with Hye-seong is going to be a letdown. There simply isn't any way to view Hye-seong sympathetically at this point.

But the conflict with Hyeon-ji remains as strong as ever, because meeting all these other ghosts has started to impress upon Hyeon-ji just how unrealistic it is for her to date Bong-pal. She's dead, after all, and ghosts are supposed to resolve their worries in the world of the living so they can peacefully move on. Granted, this episode does finally drop an explicit hint that will allow for a happy ending but...so far, anyway, Bong-pal and Hyeon-ji don't know that.

"[HanCinema's Drama Review] "Bring It On, Ghost" Episode 10"
by HanCinema is licensed under a Creative Commons Attribution-Share Alike 3.0 Unported License.