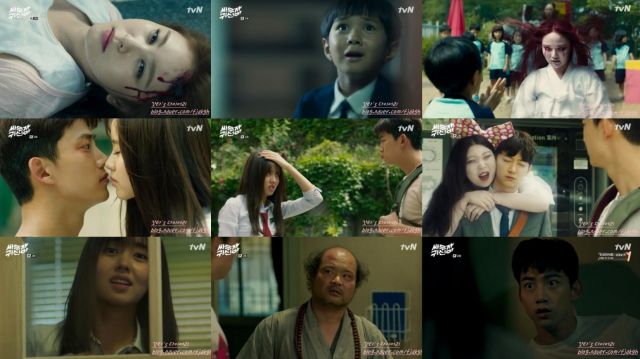 Hyeon-ji discovered last episode that by kissing Bong-pal, she was able to recover some memories. Given how Hyeon-ji is helplessly wandering the world of the living as a ghost with nothing better to do, it is unsurprising that Hyeon-ji wishes to explore this unexpected development further.. However, Hyeon-ji is a teenage girl before she is a ghost, and rather than simply tell Bong-pal her motivation and ask for help, she decides to act weird and clingy for no good reason.

That's the central joke in this episode of "Bring It On, Ghost", in much the same way that the last episode kept making the joke be about how in this universe ghosts can be punched. And here too the repetitive punchline works out pretty well thanks to strong performances. Kim So-hyun, being a teenage girl herself who is presumably still in high school, knows exactly how to act like an annoying high school girl. It is less clear how Ok Taecyeon knows how to be an unresponsive college jerk- probably sense memory from his often ridiculous character in "Who Are You - 2013".

Whatever the individual reasons, the tone works. We still have yet to see the whole gang of characters coalesce into a cohesive group. Myeong-cheol bumbles around rather ineffectively in his own exorcism adventure before team mutually annoying get involved. Cheong-sang and In-rang, meanwhile, go from merely suspecting that Bong-pal fight ghosts to coming up with reasonably convincing proof. It is as yet unclear what they plan to do with this evidence.

While the pacing in "Bring It On, Ghost" could probably stand to be a little faster, enough interesting questions are broached just quickly enough to keep me very interested in what will happen next. The flashback to Bong-pal as a kid is fascinating, if only because it begs the question of how he could go from being scared of ghosts to frequently lacking any kind of reasonable fear of the spectral entities at all.

"Bring It On, Ghost" is solid enough as a gag comedy that I'm willing to give it a lot of latitude for the moment. Director Park Joon-hwa was responsible for "Let's Eat", after all, and even at its worst that franchise was always pretty consistently funny. Oh, final note for those of who you skip the previews- there's a bonus epilogue scene at the end. Up until now I've only ever seen epilogue scenes before the previews, so I'm not sure why the ending was edited in such a way as to make people likely to miss it.

"[HanCinema's Drama Review] "Bring It On, Ghost" Episode 2"
by HanCinema is licensed under a Creative Commons Attribution-Share Alike 3.0 Unported License.