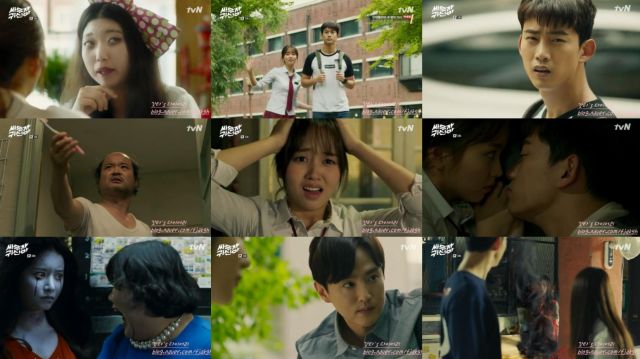 The format for this episode is mostly the exact same as the first two. Strictly speaking this is not a bad thing, since the first two episodes were quite engaging. But after a certain point rehashing the same jokes gets to be tiring however energetic and fun the relevant performances may be. Myeong-cheol is not a terribly competent priest, and also he tends to make gross sounds. Is the main purpose of his character really just going to be some variation on these jokes every single time?

Kyeong-ja fares somewhat better in that regard, because her main personality trait (man-chasing) at least seems likely to eventually get us closer to the main plot. Hye-seong (played by Kwon Yool) is the clear implied villain of "Bring It On, Ghost", but so far we still know almost nothing about him except that he has mysterious scars and is more upset about being attacked by a cat than he lets on. I mean, shoot, the same thing could be said about me, and I like cats.

The main ghost that needs to be put down this episode, while initially presented in a striking, beautifully shot setpiece, is ultimately little more than fodder for Bong-pal and Hyeon-ji to put down. They only hit upon her weakness by complete accident. But more problematic than that is how the ghost's killing spree begs the question of why more people in this universe do not believe in ghosts, since there's no other explanation for the murders.

The good parts of "Bring It On, Ghost" are the same good parts that were in the first two episodes. There's the usual great playful chemistry between Ok Taecyeon and Kim So-hyun- fights that Hyeon-ji inevitably wins on account of the fact that Bong-pal looks like a crazy person any time they have a confrontation in public. Now that Bong-pal and Hyeon-ji are finally explicitly working together, that's one more important part of the introduction out of the way.

All the same, can we please get done with the introductions very soon? I thought during the first two episodes that I could endure "Bring It On, Ghost"s combination cool spectral combat, childish flirting, and low brow humor indefinitely, but writer Lee Dae-il-I seems to be trying to test and see if that's actually true. I mean come on, really. There's so much interesting stuff in this world that I'd really like to know about sooner rather than later.

"[HanCinema's Drama Review] "Bring It On, Ghost" Episode 3"
by HanCinema is licensed under a Creative Commons Attribution-Share Alike 3.0 Unported License.