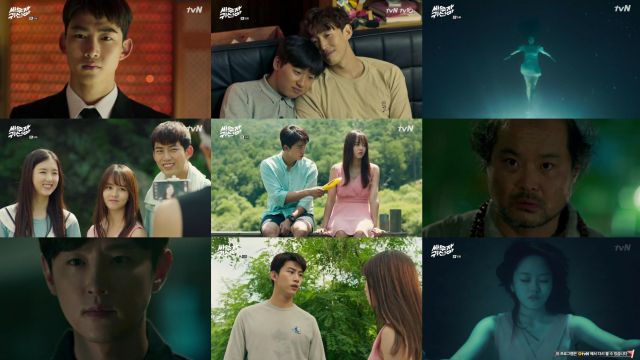 Early on another important mystery is resolved when it comes to ghosts. Apparently they can feel their hearts. Later on we learn that they can also drown. We can add all these to the previous factbook on ghosts which "Bring It On, Ghost" has offered to us, which has previously answered such pertinent questions as can ghosts eat? Can they change clothes? Are they affected by the laws of gravity? That's "Bring It On, Ghost" for you- answering all the questions that no one ever asked.

The closest we get to story progression is with Hye-seong, who after all this time has found a reason to start investigating the backstory which none of the other characters have bothered to because they're busy being generally cute and planning a trip. As usual, this prioritizes the love triangle over going into detail about Bong-pal and Hyeon-ji's backstories, which remain frustratingly underdeveloped.

Ah yes, that reminds me, Seo-yeon (played by Baek Seo-E) is Bong-pal's crush. Chang-pal and In-rang invite her on the trip in the hopes that it will make Bong-pal like them more. Chang-pal and In-rang may be idiots, but this is the first time I've genuinely been irritated by their behavior, because they are not behaving like proper wingmen. You don't just invite the one girl, you invite the one girl and her friends, so everyone can have a love interest, and you don't creep her out with an invitation to an isolated cabin with a bunch of guys she doesn't know.

While "Bring It On, Ghost" is probably not the best drama to be thinking about game theory, watching Chang-pal and In-rang fumble around incompetently with girls does at least have the potential to be funny, especially with Hyeon-ji looking over their shoulders. Unfortunately "Bring It On, Ghost" instead decides to just give us more of the same interpersonal dynamics that we've already seen multiple times. Everything, right up to and including the climax, is completely predictable.

"Bring It On, Ghost" isn't really bad so much as it is aggressively pointless. The story is happening way too slowly, and there's not even a ghost subplot this time around to break up the monotony with some gratuitous violence. We've already seen all these characters interact with each other multiple times by now. There needs to be some kind of new dynamic- I do hope that Hye-seong does something important soon, since apparently no one else can be trusted to move the plot forward.

"[HanCinema's Drama Review] "Bring It On, Ghost" Episode 6"
by HanCinema is licensed under a Creative Commons Attribution-Share Alike 3.0 Unported License.