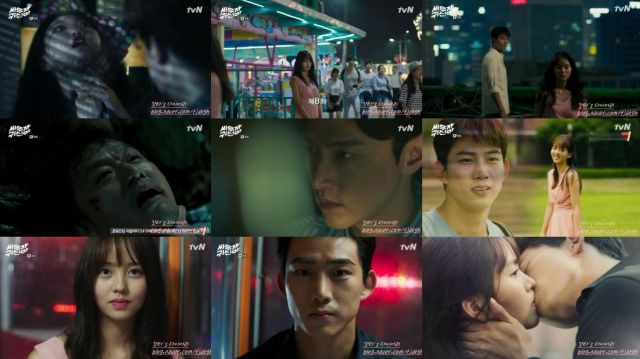 While the pacing in "Bring It On, Ghost" is slow as usual we do finally get some important information cleared up fairly quickly. It turns out that Hye-seong can in fact see ghosts, the man's just very good at pretending like he can't. What any of this has to do with Bong-pal or Hyeon-ji is still mostly shrouded in mystery, but I'm just glad that the main story is moving forward in perceptible fashion at all. Now there's actual dramatic tension when Hye-seong is on-screen.

...Which for the most part is not all that often, since as usual the bulk of the story goes to exploring the relationship between Bong-pal and Hyeon-ji. They've moved on from the usual vague antagonism to actually admitting they like hanging out with each other. While Kim So-hyun is super pouty when it comes to everything that happens at the amusement park, this is quite appropriate for the role. When in need of an actress who will act like a high school girl, an actual high school girl is a pretty good pick.

Not that Hyeon-ji is a high school girl really. Her changing of clothes, while most obviously a puzzling display of ghost logic, is symbolically representative of Hyeon-ji's character growth. Hyeon-ji can wear a pretty dress to symbolize that she's not really a high school student anymore, and Hyeon-ji can also wear a new outfit to better outline her new job as a ghostbuster. Why? Because it looks cool.

That remains the best general defense of "Bring It On, Ghost", which continues to fumble somewhat when it comes to the actual ghost-related shenanigans. While the mental hospital case is interesting, it also ends really quickly, necessitating another random generic ghost fight just to fill for time. I like the ghosts better when we have some basic idea of why they're still hanging around in the world of the living at all, since among other things it gives more personality to the fights.

This flaw notwithstanding, "Bring It On, Ghost" does consistently manage to be cute in the main important ways. Cheon-sang and In-rang look completely ridiculous in their ghostfighting outfits, although given that they're just the middlemen for an inherently weird job the look is appropriate. And I just can't get enough of that ridiculous ghostfighting van, where did they even get that thing? Did someone on the production team find it in the back alley behind their mom's house?

"[HanCinema's Drama Review] "Bring It On, Ghost" Episode 8"
by HanCinema is licensed under a Creative Commons Attribution-Share Alike 3.0 Unported License.