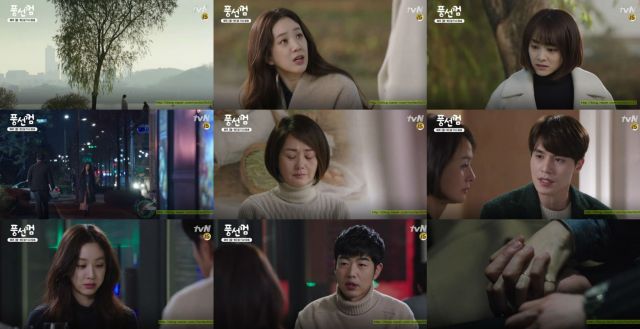 This episode is bookended by confrontations between Haeng-ah and Ri-hwan. The dramatic thrust, as usual, is that they take a long hard time to think about whether or not they want to go any further in this relationship. And of course, as Haeng-ah points out in the very beginning, Ri-hwan's actions certainly make it look like he worries about her as if she was a girlfriend, while verbally Ri-hwan insists that no such relationship can exist between them. For, you know, reasons.

So as with the typical episode of "Bubble Gum" at this point, I'm left with mixed feelings. Every time the drama runs this story point I feel like we've just gone around in a big circle. And yet by the end my feelings are less those of annoyance and more those of empathy. Is it the performances that's elevating the material? The direction? Or is it just the soft realization that Ri-hwan and Haeng-ah are characters of genuine reflection who are capable of talking to each other like adults instead of acting like children, and isn't that alone something worth aspiring to?

This feeling is weird for me because at this point I could probably plot these feelings out on a graph. Like, for the first portion of the episode I find myself wondering how it is that Lee Dong-wook has such bright red lips. Is it just an effect of the lighting or something? Why does it look like he's wearing lip gloss and Jung Ryeo-won isn't? Just, you know, trivial stuff like that is what occupies my mind, because it presents more interesting questions than the ones Ri-hwan and Haeng-ah are actually asking each other.

Then by the end I'm feeling somewhat touched again. Although I wouldn't say this necessarily evens out. "Bubble Gum" doesn't really hold up to narrative analysis at all because there isn't really much of a narrative here worth discussing. All the talk about dementia could easily be replaced by talk of cancer and "Bubble Gum"'s narrative construction would only be that much more obviously melodramatic.

I don't dislike melodrama, but Seong-yeol's medical condition seems to be bad more in the hypothetical sense than because it's actually that much of a day-to-day problem. By the way, that doctor was terrible. I know people try to talk over each other in real life all the time but it's a jerk thing to do and in the context of a television drama that just makes it harder to figure out what's going on.