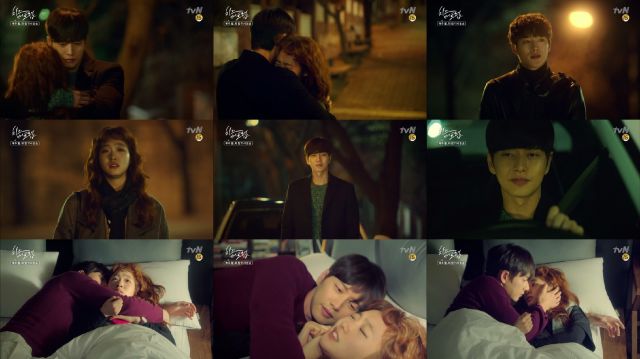 Early on Seol ends up choosing which antagonistic character to support when a fight unexpectedly breaks out. What's significant about Seol's thought process is that she could just choose not to get involved. But in the end Seol makes a moral decision to the effect that that deliberately manipulative behavior is more deserving of public censure than performing worse on the arbitrary metric of social rules.

This decision sets much of the tone for the episode, because Seol predictably comes to realize that her recent judgment of Jeong was probably a little harsh. More importantly, though, Seol misses Jeong, and he misses her. Aside from the usual college drama there's a major flare up domestically. It's moments like that where a significant other is most important. When family gets to be unbearable, you need to talk to and get validation from someone who isn't a part of that circle.

The reverse is also true of course, but "Cheese in the Trap" makes a point of taking these crises one at a time. After a tough day, going it alone just isn't satisfying, not like having a good cry on the arm of someone who you really trust to have a sympathetic take. The central issue is not whether Seol is right, but how she's holding up emotionally and needs the comfort. It's the major obvious distinction between the mutually reenforcing love Seol is coming to understand and the obligatory one Yeong-gon obsesses over.

That is the context which really gives power to the kiss scene here. What really struck me about the kiss was just how underplayed it was. There's no extended close-up, no excessively romantic music, and it's not even presented as a closer. All of this works to the scene's emotional power- "Cheese in the Trap" is reminding us that in real life, you have to say something after the kiss. Preferably while making proper eye contact.

That's the kind of drama "Cheese in the Trap" is- it takes generally mundane material like eye contact between romantic partners and manages to make that seem more tense and relevant than the kiss. And it's all so true. "Cheese in the Trap" continues to be very strong as an overall production- about the only weak spot is that by the end Jeong has seized upon a misunderstanding to treat Seol much the same way she was treating him before. But then that's a problem with relationships in general- how they tend to be cyclical.

"[HanCinema's Drama Review] "Cheese in the Trap" Episode 11"
by HanCinema is licensed under a Creative Commons Attribution-Share Alike 3.0 Unported License.