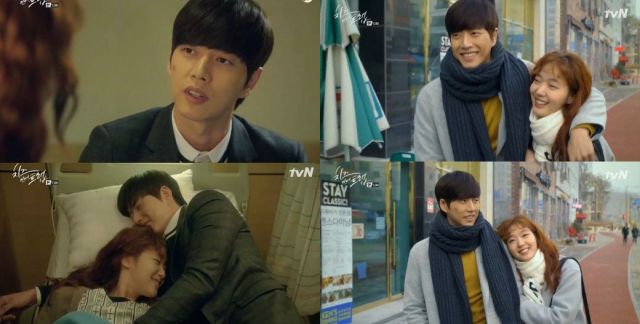 In my first review for "Cheese in the Trap" I incorrectly described Seol's friend Eun-taek as being the boyfriend of her best friend Bo-ra. My assumption was presaged on how they act ridiculously flirty around each other, such that I was surprised to finally realize they weren't actually dating. Why? Well, because Bo-ra's mostly arbitrary requirements regarding possible boyfriends rule Eun-taek out. In this episode, that issue is finally realized.

The narrative parallelism is helpful for the rest of the subplots as well. Seol is still finding ways to antagonize her classmates by basically just standing up for herself and erecting personal boundaries. In a more poorly written drama I'd think the script was trying to make Seol out to be a martyr. But in "Cheese in the Trap", the moral message is an obvious one- growing up is hard because not everyone wants to do it.

In-ho is an even better example of that. It's a struggle for him to deal with the financial responsibilities of his family while still attending college, especially so because In-ha really doesn't get how difficult the situation is. In-ha is still picking petty fights and being generally vain in such a way that In-ho's more serious responsibilities only get more difficult and more stressful. It's easy to see why In-ho straight up picked a fight with Jeong last episode. If anybody needs an excuse to punch somebody in the face, it's In-ho.

As far as the main romance goes...well, there's not much to go on. Which is intentional. The main times Seol and Jeong realize they need each other is when they're going through crushing self-existential crises. Day by day, their lives are just annoying right now rather than actually terrible. So freed from her own emotional needs, Seol is able to take a moment to observe that In-ho is obviously feeling really bad right now, and needs someone to talk to even if he doesn't want to admit it.

I like how "Cheese in the Trap" is building up, not to an explosive climax, but rather a sort of flatline where the characters have to ask themselves to what extent they can tolerate little annoyances before they're willing to swallow their pride and take a firm stance. The irony is that Seol and Jeong are pretty much already at this point- yet their own maturity and character growth somewhat perversely makes their continued romance seem less important. They don't need constant validation, and that's a good thing.

"[HanCinema's Drama Review] "Cheese in the Trap" Episode 13"
by HanCinema is licensed under a Creative Commons Attribution-Share Alike 3.0 Unported License.