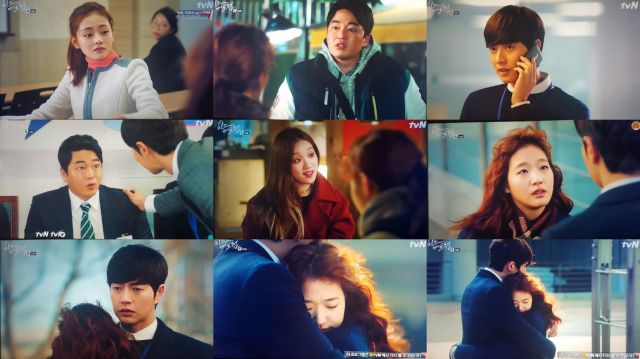 Second leads never have it easy in dramas, but In-ho knows more than most that he really is in a completely impossible position. At best all he can do now is try not to act creepy. In-ho forces Seol to acknowledge the awkwardness and makes a request that's probably more unreasonable than it sounds. His position is a pretty good argument for why it's better to just keep your mouth shut when it comes to confessing to someone you like and see on a regular basis.

...At least it would be, except that Eun-taek's scheme to get close to Bo-ra mostly works, although there are other important factors at work. Like how Bo-ra does not have a boyfriend, how they've always been flirty, and also how it seems mildly implied that Seol has been collaborating with Eun-taek to get Bo-ra to appreciate him as a man rather as a random friend who just so happens to be really handsome. Yet even so, a scheme is a scheme.

Tone might play a role at least. At the prompting of one of Seol's petty interpersonal conflicts, Jeong once again ends up going for the jugular in a way that's a little extreme. Granted the guy was being a jerk but isn't it going a little too far to crush his dreams? In Jeong's point of view, there's not really any concept of restraint, and I was honestly rather surprised at Seol's reaction upon discovering the full extent of Jeong's plans at the end.

If I had to pick a single essential thematic element for "Cheese in the Trap" it wouldn't be romance, or even self-discovery. It would be the role overthinking plays in schemes, and how whether a character's actions come off as just, ambiguous, or evil is almost entirely a matter of context with no relation to intent. It's why Jeong often comes off like a character in a psychological thriller rather than a love story. When Jeong's not with Seol, that's how he sees the world.

Is this something that needs to be fixed, or should we just consider this different strokes for different folks? While I like Eun-taek and Bo-ra as a couple, they really are kind of one-dimensional compared to the other relationships in "Cheese in the Trap", which is why the production team is able to wrap up their story so easily at practically the last minute. In-ho is only just now managing to sublimate his mental issues into piano. While that's pretty enough, the road to recovery is a long one.

"[HanCinema's Drama Review] "Cheese in the Trap" Episode 14"
by HanCinema is licensed under a Creative Commons Attribution-Share Alike 3.0 Unported License.