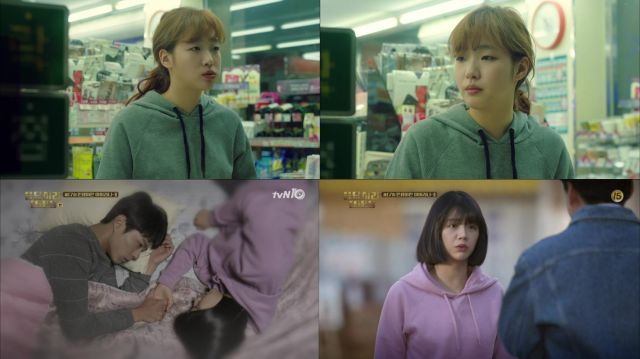 I've seen the whole "awkward first date" trope play out so many times in fiction that I'm used to it being, well, theatrical, with everything going horribly wrong. Seol and Jeong's first date is more...real-life awkward. Like, the movie they end up going to watch is a little weird, there's odd little nitpicks about pricing which they don't discuss. There's never a conversation about actual date stuff. In short, Seol and Jeong don't seem to have any idea what they're doing. Why is that?

Well, because nobody ever has any idea what they're doing on a first date. We're always just making this stuff up as we go along. Most of the time you have to actually explicitly awkwardly describe the outing with a potential romantic partner as being a date just to avoid the risk that the other person might interpret the outing as a platonic one. The more I think about it the more obvious it is that dating is weird and doesn't make any sense. And "Cheese in the Trap" is quite possibly the first work of fiction I've ever consumed that actually acknowledges that.

It's almost like director Lee Yoon-jeong is trying to pull off an anti-romantic comedy here, except that "Cheese in the Trap" is still romantic, and it's still funny, it's just not doing either of these things in the proper way. There isn't even any postmodern self-referentialism. Watching "Cheese in the Trap" is like peering into some sort of weird alternate universe where the tropes of the romantic comedy genre evolved in a completely different yet more realistic way than they did in our world.

And this isn't just an issue with the plot. The production too feels practically otherworldly. How and why are all the background plants so green? I know that logically this episode is taking place at a certain time of the year and that the drama as a whole was almost entirely preproduced but it just feels so wrong to see such nice weather in a currently airing drama when right now it's so darn cold outside.

That's the frequently ambivalent feeling I get from watching "Cheese in the Trap". The drama is fun and enjoyable and yet so barely weird that it feels like there's something horribly wrong even though I know logically that it's only my assumptions that are incorrect. The production team isn't making any actual, you know, mistakes. So in other words this drama is just college all over again. Well played, "Cheese in the Trap". Well played.

"[HanCinema's Drama Review] "Cheese in the Trap" Episode 4"
by HanCinema is licensed under a Creative Commons Attribution-Share Alike 3.0 Unported License.