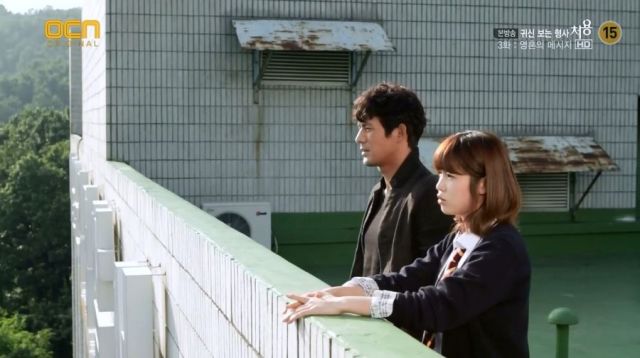 Having shown its love for a certain formula over and over again, there is little to be surprised about when it comes to OCN series and their form and trajectory. A leading man carrying a trauma and being a loner type, an ensemble of stock characters, a villain/obstacle and a lot of action and social commentary with moments of often awkward, forced humor in-between. 'Cheo Yong: The Paranormal Detective' follows that same formula and has more problems than other shows, but it also offers some freshness that ultimately becomes its strength.

The series follows the work of Yoon Cheo-yong (Oh Ji-ho), a detective who can see ghosts. Since an evil presence he fought with seven years ago went off a bridge and took his then partner with him, Cheo-yong has worked as a regular police officer, avoiding being a detective handling cases. However, he is drawn back to that when a case he decides to take on brings his path to that of Ha Seon-woo (Oh Ji-eun), a detective who seems to have a past with him. In the station where Seon-woo works at, Cheo-yong meets the ghost of a female student, Han Na-yeong (Jun Hyo-seong), who has no memory of who she was before her death and is confined to the station by an invisible barrier. He then begins working as Seon-woo's partner and their team tackle different cases in each episode. Both in its crime part and its ghost part, both in writing and the practical side of things, 'Cheo Yong: The Paranormal Detective' is really not what one would call a good series. Or quality series. The crime cases are mostly predictable and full of plot holes, as is the main plot. Due to gunning for the multi-season format, OCN shows are very empty in terms of their main story arc. The big villain-related twist can be guessed from the very opening scene of episode 1 and the final confrontation does not surprise much either, although more questions are raised than answered.

However, the social commentary of the cases is still here and it is very much appreciated. With different types of victims, allies and baddies, the series manages to highlight some problems of Korean society and have a heart, even if it has forgotten its brain in the promising premise. The main characters also feel more approachable than in most such series. Compared to other OCN dramas, this one has three leads who are connected to the main story in personal ways. This means that they all equally matter and are given focus. Given two of them are women, it is also a pleasant change from the male angst which usually governs these works. Being invested in these characters' story and wanting to see them succeed keeps one interested.

The same lack of solid writing is found in the ghost part of the series, however. When a work uses fantasy, it is important that the writer creates rules by which that fantasy will operate. It creates the mythology of a series and gives its non-logical parts logic. In 'Cheo Yong: The Paranormal Detective', there is no consistency. Cheo-yong's own powers have not been given origins and some things that happen later on contradict even what the viewers knew about them for most of the series. The exact powers of the ghosts and even the main villain also seem to have no rules other than to adapt and serve the plot, offering a way out to the writer who is clearly way in over their head. Yet again, heart is what it comes down to. Wanting to find out how the ghosts ended up that way and why they do the things they do and wanting to see justice for them keep one invested. Na-yeong, while annoying at times is also quite an endearing character and while both the ghost element and her contribution are mostly a gimmick to sell what is yet another crime series, they are entertaining enough to be worth the trouble.

And this is the selling point of most OCN works. They are not terribly detailed, well-written or contemplative, but they are entertaining . They are crime fluff. Each series has a different selling point, but they are all still just light time-killing entertainment when it comes to their main plots and characters, while still offering a good view of the less happy side of society through their individual crime plots. 'Cheo Yong: The Paranormal Detective' is more lacking in parts that other OCN works do better at and this means that those who love said parts will find this title boring and empty, but its unique trio of leads is its own selling point, if the viewer emotionally connects to them.