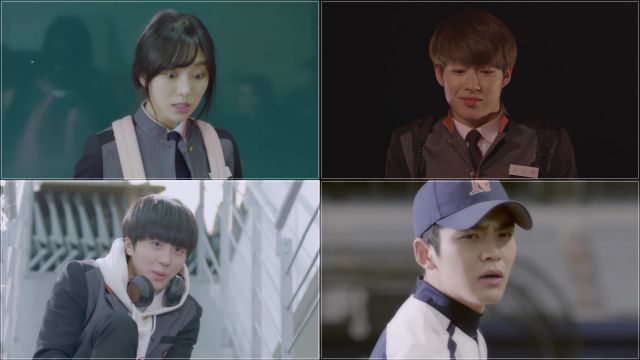 The prologue of "Click Your Heart" sets up Min-ah (played by Kwom Min-ah) as a high school girl whose acquaintances have this bad habit of falling into very unfortunate...accidents. Not that this is given much focus. "Click Your Heart" makes a point of prioritizing concept. Two clicks later from you the viewer, and Min-ah will have a boyfriend. On the A Path, the choices are baseball player Ro-woon (played by Rowoon) and childhood friend Da-won (played by Lee Da-won). Similarities to idols entirely coincidental, of course.

One part of "Click Your Heart" I like is just how boiled down to essentials it is. It's not really that important that Da-won is Min-ah's childhood friend, and then in their final episode we get elaborate flashbacks to childhood dreams and promises with adorable kid actors. This feels so out of nowhere as to be laughable. Yet I understood perfectly well what was going on because really, aren't high school romance tropes all mostly the same anyway?

Writer Kim Bo-yeon-I has really nailed down the essentials of the genre here. "Click Your Heart" reminds me of those single chapter themed webtoons that read more like prologues than self-contained stories but really, what difference does it make why the grumpy athlete is grumpy? His style is to be grumpy because that's how he gets a girlfriend is by suddenly transitioning to a direct, highly interested attitude.

Ro-woon and Da-won are pretty good comparison points because they represent completely different kinds of fantasies. The former inspires faith through sheer confidence, whereas the latter is a guy you can spill your heart to. It's also funny how the "choice" Min-ah makes to decide between the two is not necessarily intuitive. Which teen romance cliché is the most likely to provoke the right reaction from the right guy, and which one will end up taking the story in a completely different direction?

While it's kind of nice that "Click Your Heart" makes every shipping choice a valid option, I do feel a little sad knowing that in three of the possible four realities Da-won doesn't get what he wants. Although it's appropriate that trying to watch only three episodes of "Click Your Heart" creates a kind of tunnel vision. Whoever Min-ah ends up with, she's not looking at the other guys anymore. So it is with Ro-woon that it's just baseball, baseball, baseball, even if so far public embarrassment looks to be de rigueur.