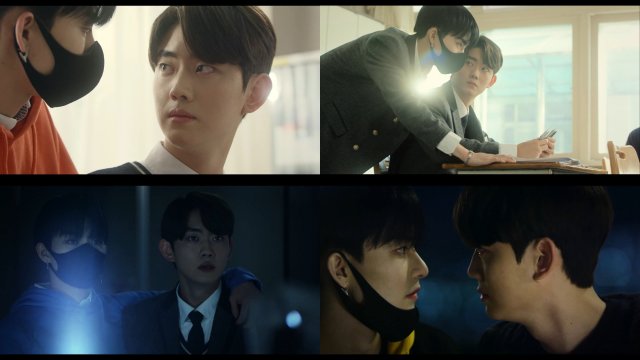 Yeon-woo (played by Yoo Jun) is a Mono. I'm still not completely sure what that actually means, but apparently he sees the world largely in grayscale. Yeon-woo's mother was also a Mono, before she died due to some horrible circumstance that will presumably be explained in later episodes but for now is being kept kind of vague. Anyway, when a Mono meets a Probe, they start seeing the world in countless colors simultaneously. And for Yeon-woo, that Probe is Yoo-han (played by Hur Hyun-jun), and also this whole "Color Rush" thing appears to be some kind of metaphor for being gay.

I have to expend a surprisingly large amount of energy just figuring out how the worldbuilding in "Color Rush" even works. I think I'll probably have to read the web novel to get any kind of grasp as to what this drama is actually about. It was only at the end of the fourth episode that I finally realized the whole Mono/Probe thing is well understood by other characters in-universe, and that Yoo-han knows he's a Probe.

At least I think that's how it works, since Yoo-han is always wearing a mask for reasons that are never explicitly explained. Up until the end of the the fourth episode I had been assuming that being a Probe was kind of like being someone's one true love, and that might be what it does mean actually. There's a lot of mixed metaphors here, since Yeon-woo blames the entire concept of Probes on his mother's death and other various horrible things, yet Probes are also shown in a highly romantic light, often quite literally.

That visual gimmick, by the way, is the main concept tying "Color Rush" together. Anytime Yoo-han drops the mask, there's a huge explosion of sparkly colors that seem to form an epicenter around Yoo-han's eyes. The effect is so extreme it can cause Yeon-woo to faint. The direction of these effects is really well-done. The colors are so appealing that my eyes were drawn to them like a moth toward a flame, which is exactly how Yeon-woo sees them.

Now, to be fair, while I describe these as mixed metaphors, that's also a fairly deliberate part of the narrative construction. Love, especially young gay love, is dangerous. Not that we see much evidence of homophobic prejudice in the world of "Color Rush" as the sparkly lights are shown to be threatening enough on their own. "Color Rush" is, for better or worse, a pretty straightforward boys' love story beyond that particular gimmick.

I'm inclined to think of "Color Rush" as being on the worse end of that spectrum, since aside from the snazzy color effects the production values are average at best. Now, debatedly, this is merely an accurate representation of the drabness of Yeon-woo's daily life which can be seen as a contrast to the addicting sparkles of Yoo-han's eyes. I'm still debating whether the drama really deserves that much credit, but for the first four episodes at least it's perfectly watchable.