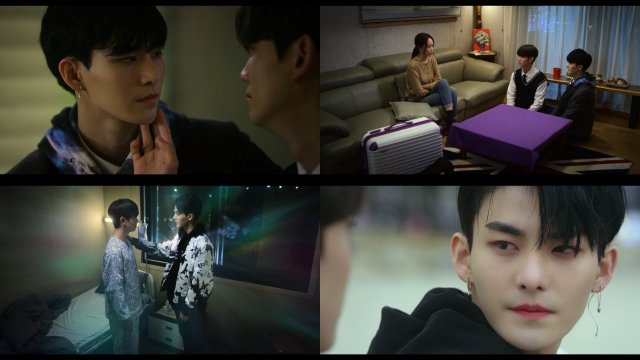 There's a notable change in Yoo-han's disposition in episode fix of "Color Rush" as the always masked young man begins flirting more openly with Yeon-woo. Also he starts to more aggressively lose the mask, confirming my suspicion that the mask was acting as a handicap to Hur Hyun-jun's weak acting talent as much as anything else. Worry not, Hur Hyun-jun isn't terrible in the role, and everybody has to start somewhere. But it's hard to escape the feeling that a webdrama as weird as "Color Rush" got funding at least in part to boost Hur Hyun-jun's acting resume.

Not that "Color Rush" must have been particularly expensive to film, mind you. The color effects are cool, but hardly something requiring state of the art technology. As in the first half of the drama, all of the action takes place on minimalist sets. While the drab backdrop was good for the first half, since it heightened the contrast of the color explosions, it loses a lot of punch in the second half as the story moves away from Yeon-woo's comprehension of the world of colors and more to his uncharacteristic propulsions toward violent behavior.

The first time we see Yeon-woo messing around with ropes the entire drama makes an abrupt turn into darker territory. While I could sort of sympathize with the depiction of Yeon-woo's teen angst, ultimately the plot point is too much of a sharp swerve to really feel credible. The fact that the backstory regarding Yeon-woo's mom remains darkly ambiguous to the end doesn't help matters.

The worldbuilding also remains vague enough I wasn't sure whether Yeon-woo's fears were realistically grounded or just a result of his own bad family experience. Yeon-woo's aunt I-rang (played by Yeon Min-ji) was a lot less helpful in this regard than I was expecting. She's vaguely skeptical of Yoo-han as boyfriend material but doesn't seem that committed to the idea. We also don't see reaction to Yeon-woo's rash decision, which is frustrating given that she's the only family he's got.

Speaking of which there's a huge infodump on Yoo-han's family which was so ridiculous and out of nowhere it felt like parody. But then we also find out that Yoo-han was hiding another secret which feels equally pointless, given how little we saw him interact with characters aside from Yeon-woo. In general there's so much focus on the cheerful gay teen romance that serious drama never gets room to breathe.

I suppose this is part and parcel for the boy's love genre really, though. "Color Rush" never really attaches much significance to its lead characters being gay either, nor should it. I liked how they were allowed to exist outside of their sexual identities. At the same time, the latter half of "Color Rush" is a drama that underdoes its backstory while having multiple extended sequences wherein Yoo-han just recites the names of colors. There's charmingly silly, and there's just silly silly.