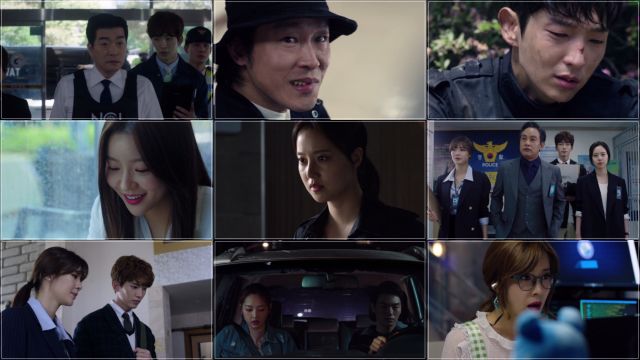 In the opener to "Criminal Minds", we meet Hyeon-joon (played by Lee Joon-gi), and his experience during a very unfortunate terrorist bomb threat. Flash forward a year later, and Hyeon-joon is a normal cop. Then, the special criminal profiling division in South Korean law enforcement takes an interest in Hyeon-joon's case, involving a serial killer. While Gi-hyeong (played by Son Hyun-joo) is the man in charge, Seon-woo (played by Moon Chae-won) is the team member who does the most talking with Hyeon-joon.

I've never been a big fan of the original American version of "Criminal Minds", even if (in contrast to "The Good Wife") reruns of the drama are popular on Korean cable. For me, the main issue was just the grisly way the serial killers are fetishized, and the grotesque voyeurism shown by the camera with the victims. That aspect is definitely a part of the Korean version too. Any scenes involving the victims will make the more squeamish among us rather uncomfortable.

But by and large I was pleasantly surprised to find that, so far at least, the Korean version actually improves upon the American formula. For starters, we already have the rumblings of a character arc with Hyeon-joon, a man who is skeptical of the value criminal profiling holds. As far as he's concerned, these people are evil. End of story- just follow the evidence. Seon-woo has to actually convince Gi-hyeong that they know what they're doing, and it's telling how so far, at least, her arguments aren't all that convincing.

"Criminal Minds" also benefits a lot from how this story, which was an hour long in the original American version, is being stretched out to two episodes in the Korean remake. This gives us a lot more time for characterization and navigating various twists and turns. This surprised and intrigued me- while the serial killer is found relatively easily, for example, this was mainly by virtue of dumb luck. The question of how, exactly, he commits the crimes remains open-ended.

At minimum the production team of "Criminal Minds" clearly knows how to structure an engaging mystery. They've already figured out that the real drama isn't in how this story ends, but how the main characters get to that point. Even the cheesy cliffhanger really sells this, because this is very much a "now how is she going to get out of this one" situation. Will Seon-woo survive through luck, or through a demonstration of hitherto unknown skill?