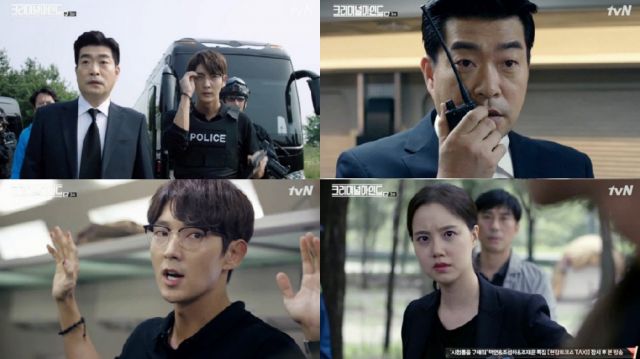 In a bizarre inversion of the previous story, the entire train incident only takes half an episode to resolve. Even stranger, while a big point was made of how Min-yeong (played by Lee Sun-bin) was on the train, she being the last team member, the train incident offers virtually no exposition of Min-yeong's personality or skills. Hyeon-joon actually gets more action than she does, quite literally solving the entire stand-off single-handedly.

At least the stand-off is well constructed. The editing in last episode's cliffhanger left this point unclear, but we find out right away that the hostage taker stole the gun from the detective. This does leave him a character relying more on luck than skill, since he correctly guesses the location of the gun and the detective rather inexplicably lacks the combat skills necessary to prevent being so badly embarrassed by what is, for all we can see, a random crazy person who for some reason was not sitting next to his shrink.

Where does criminal profiling fit into all this? Actually, I'm not really sure. Which is part of why having Hyeon-joon come up with the solution is so bizarre for a drama whose premise is still in the introductory phase. I wonder if this is why the train plot resolves so quickly- the production team realized the train story was a very bad example of criminal profiling, and that "Criminal Minds" is best explained by a more long-running plot about a serial killer.

Mind, I'm just assuming this plot will be long-running on account of how it is described here in purely expository terms. There's still not that much investigating except in the most abstract sense. Which come to think of it is how actual profilers work. Short of an interrogation scene there's never really any situation where it would be appropriate for a profiler to actually talk to a suspect.

At first glance this sounds like a limitation on the premise. But once more, as an adaptation of a long-running American drama series with a functionally infinite number of stories that could be chosen for adaptation, it's hard to avoid the sense of comparison. I'm still holding out some hope that more traditional Korean drama trappings are going to show up here. I'd rather not these reviews consist entirely of snarky remarks about the logical inconsistencies of the individual mysteries, although I will go that route if I have to.