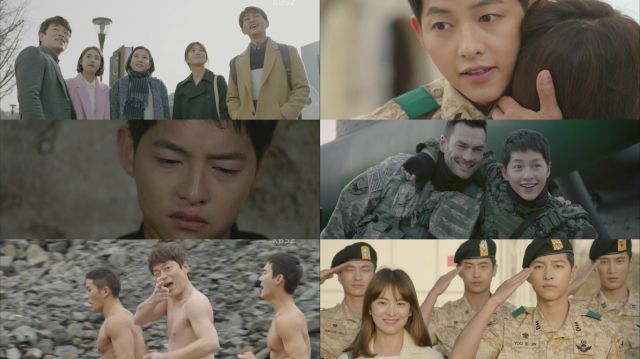 "Descendants of the Sun" is a master at sparking emotion. No matter how illogical the plot may become, the emotional barometer is insanely high. This must be why Nielsen Korean is clocking this drama at 33% for episode 12, a whole 1.1% higher than last night's episode. Wow. It is the human element that "Descendants of the Sun" is really learning to master that makes is so addictive - for me and the rest of the world.

Before I go any further I have to say, "Oh my gosh, the feels!" This show delivers in every way. Sure, the situations are ridiculously absurd. Who can disarm a bomb by shooting it? Yoo Si-jin can! He can also take on several armed men without a single military or civilian casualty. But with that said, the entire montage was pregnant with poignant tension that was due very much to the gifted Song Joong-ki. Billions of people all over the world are fans of his for a reason. Many actors are handsome. Few can manipulate a camera frame with a twitch of a facial muscle and a well-placed tear. Song Joong-ki can. He did. Multiple times. 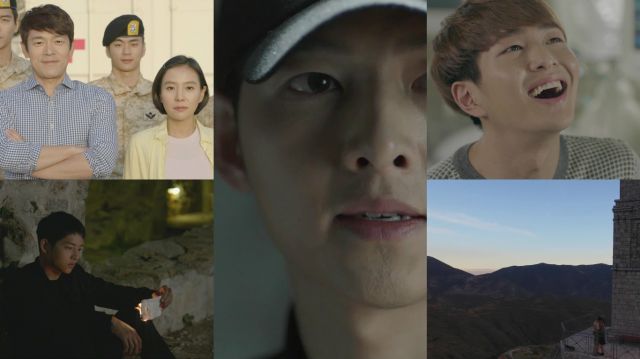 There was a moment he cried over killing a comrade turned foe. Their relationship while Argus was alive didn't reflect much friendship, at least on David Argus' side. Si-jin's struggle to cope with the death, however, was raw and moving. It was what  made him so wonderful in "Nice Guy" despite the horrors of that plot.

And we must turn from the heartbreaker Song Joong-ki to world beauty Song Hye-kyo. It would be a crime to relegate her to "mere beauty" status. She takes what could be a very annoying character and turns her into a troubled woman with a big decision to make. Bravo, Song Hye-kyo. Mo-yeon sees the danger Si-jin puts himself in for his country and his people. It terrifies her and her old, lasting fears over their relationship bubble to the surface. Unlike the beginning, however, she takes time to really think about his devotion to her, and to his country and what his work means to him. And to her. Song Hye-kyo shows the difficult of this process. Mo-yeon comes to the conclusion that she wants to be a honest with possible with Si-jin and that he does everything he does, mainly lie to her and disappear on dates, to protect her and their countrymen. It's a lot to grasp, and she does it. She also asks him to be honest about the danger he's in, which is more than a fair request. I forgive her for getting on my nerves before. We do get a swirling camera kiss between them that was probably ridiculously expensive to film. But the best moment is just after she accepts him fully, and they hug - a full body, comforting hug. No mind blowing kiss scene. It's raw and real. Yes! 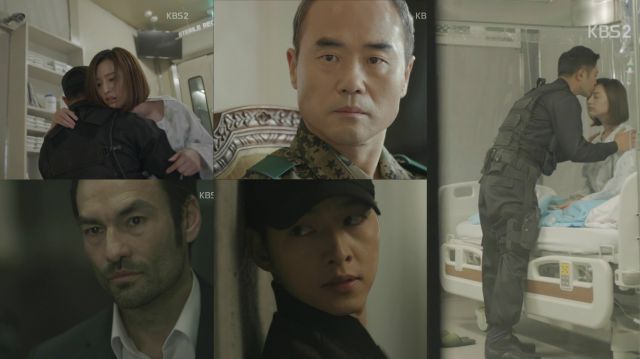 The romance in this show is finally worth all the hype. We have three very different romances. The sappy sweet love between Dae-yeong and Myeong-joo; the earnest romance between Si-jin and Mo-yeon; and the puppy love between two friends turned something more between Nurse Ha and the hilarious Doctor Song. He was a show stealer with his snarky comments, joking, and joining the shirtless soldiers for their morning jog. All three will certainly be tested now that everyone is back in Korea. As will the friendships between the medical workers and the military folk.

Chi-hoon receives a true white flag from the construction worker he left behind during the earthquake rescue and I can see a bromance in their future. Please, oh please, let that happen. The friendships in "Descendants of the Sun" are just as strong as the romance.

Aside from the hard-to-believe military operation at the beginning of the episode, this was one of the strongest episodes to date. It's a drama about people, and Writer Kim really knows how to pull a few heart strings. She pulled mine, if you couldn't tell. 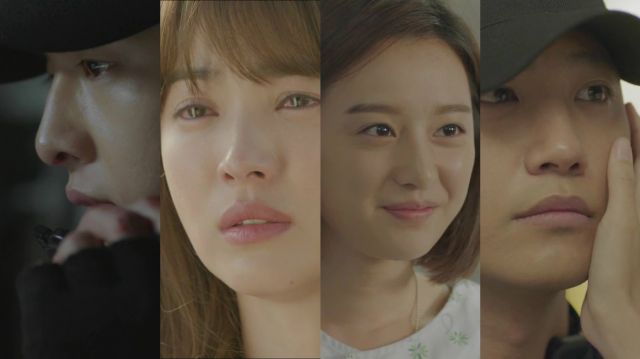 What did you all think? Did this episode make you melt? Are you cheering on our couples and friends?