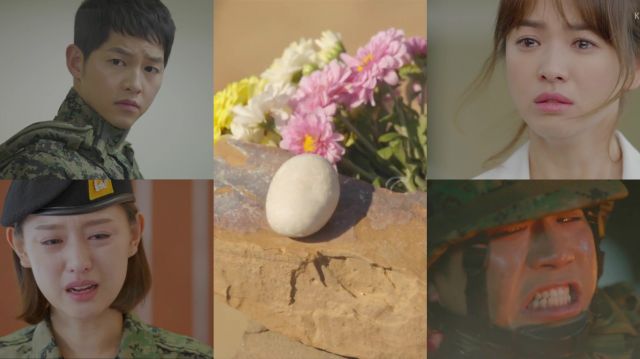 In its penultimate episode, "Descendants of the Sun" tops itself with 34.8% ratings in spite of the fact that it was competing with South Korean elections. This drama suffers from too many tonal shifts, but the tone of this episode was so solid that it was a tight, emotive watching experience even though it didn't quite match the rest of the drama.

Let's just get the not-so-great stuff out of the way so we can then focus on all the awesome things this episode got right.

1. Where in the world did the side characters go? We saw them in teasing spurts, but they were not present like they had been in Uruk. I miss them. The only one we really got to see was adorable Gi-beom who forged a new path and a new life for himself. Good job, kid.

2. Chi-hoon had a baby, right? At least I remember his fiancee sporting a pretty impressive baby bump and going into labor. He didn't seem to be fatigued in the least, nor did he talk about his newborn son. Very strange. I am glad that my predictions about his fiancee suffering from a hard delivery did not come true.

3. What is with the horrible signage that Dr. Daniel had posted around him? The English was laughable. With all the money spent on the drama, did they not find one person to copy edit the foreign language text?

4. I realize that this show needs to be mindful of their Chinese audience, but all the dancing around Si-jin and Mo-yeon having a sexual life was frustrating. They are adults in a loving, consenting, respectful, and passionate relationship. This is a huge point of contention in drama across the board.

5. When Si-jin and Dae-yeong were reported dead, why didn't we get to see the reactions of all the people who loved them, not just their girlfriends and families? Part of this drama was focused on the way families are forged by working through tough situations together. The medical and military families should've had a role to play in that sadness. 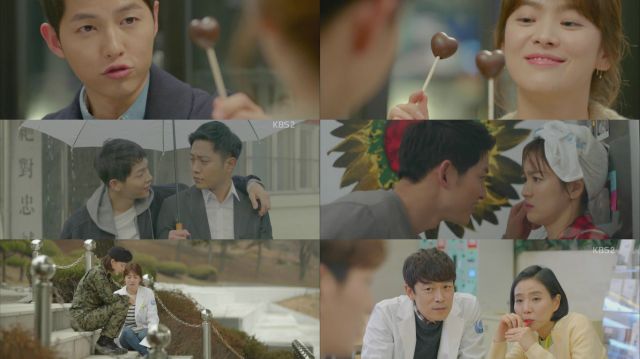 Those were my major complaints of the episode. Now I'm going to get the other sad mention over and done with, and then we can move on to the amazing bits. Si-jin will probably not die in the last episode; not after he made a miraculous return in this one. As a writer, I can see the show permanently leaving poor Dae-yeong gone. It's realistic given his line of work. Before its airing and throughout the drama there has been speculation of the death of a main character. Of course, as a Dae-yeong fangirl myself I totally am opposed to anything bad happening to him. But, as a realistic writer, it's a possibility.

Okay! Bad stuff out of the way. Onto everything else. This episode was full of the kind of "feel-good" moments that are more than just fluff. Si-jin and Mo-yeon have a wonderful rapport. They banter, exchange inside jokes, are earnest about their feelings, and have learned to truly understand each other. Their relationship gives Mo-yeon the impetus to go after her real dreams as a doctor that she continues to pursue after she believes Si-jin is dead. She hones her surgical skills and continues to work for the betterment of medical politics and practice. 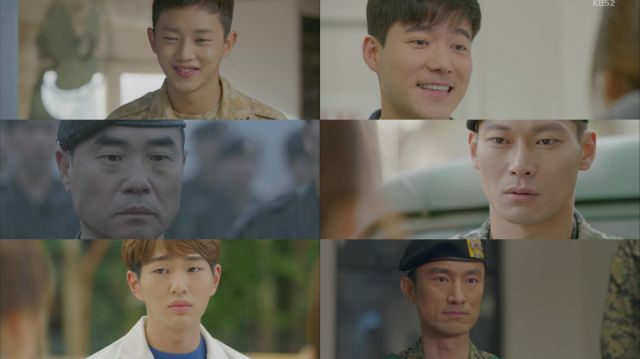 Myeong-joo and Dae-yeong did not enjoy the same bliss as the Song-Song couple before separation, but the actors did get some powerful on-screen moments. Jin Goo, despite his severe lack of dialogue, managed to speak volumes with his eyes. Kim Ji-won has gotten some of her best character beats in in the second half of the drama, which makes me mourn the beginning of the drama were her character was a tad whiny. She's quite the talented actress. The moments between Dae-yeong and Si-jin were also quite powerful. I hesitate to call their relationship a "bromance" because although it contains the cuteness we often associate with the word, their relationship runs much deeper than that. They are friends, brothers, and comrades. They banter with each other, but they will literally take bullets for each other. They talk about girls, but they also talk about life and death. Their relationship is highlighted so starkly in this episode that it makes me ache for the same attention earlier in the drama. 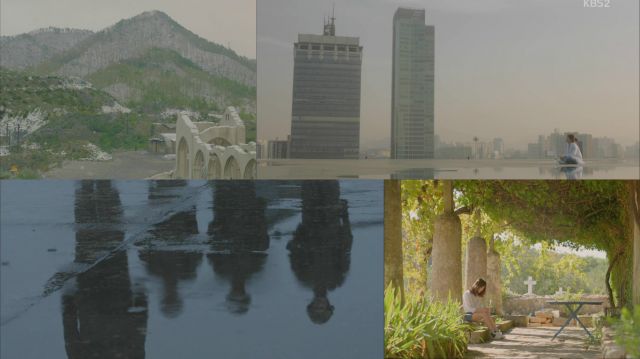 Another strong point of this episode was the production. Silence and sound and music were constantly juxtaposed to play with emotions, especially at the end when Mo-yeon stood in the desert. Not even the sound of the wind could be heard until hope flooded her heart. When Myeong-joo's father receives the news that Si-jin's and Dae-yeong's bodies were not found, he and the other soldiers stand solemnly in the rain, soaked from head to toe as the raindrops pattered on the ground and the reflections of the soldiers wavered sadly in the puddles. Water played a huge role in the imagery of the episode from rain, to puddles, to snow, to tears. It's the best use of imagery I've seen since the first week of the drama when the color red was used to transitions between medical tubes and bleeding men.

After watching these characters struggle for fifteen episodes, I have one thing to say towards Dae-yeong: Don't go towards the light! We need some happiness! 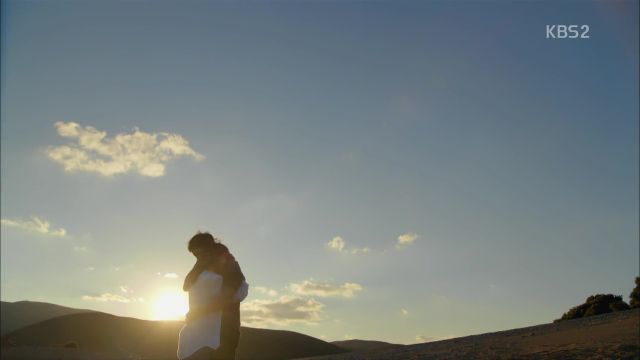 "[HanCinema's Drama Review] "Descendants of the Sun" Episode 15"
by HanCinema is licensed under a Creative Commons Attribution-Share Alike 3.0 Unported License.