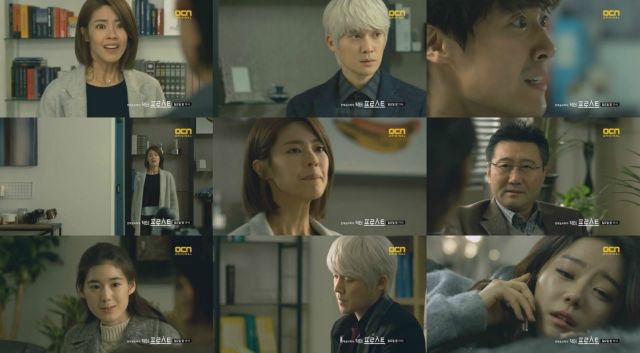 Well, if nothing else, this episode of "Doctor Frost" marks a rather different story direction. There's no murder investigation this time- well, at least not of the recent variety. Doctor Frost and Song-seon are forced to confront the ghost of their recent history together. And the story does manage to be a reasonably sad one- if the basic plot of this episode were transposed onto a drama special it probably could have worked fairly well.

Unfortunately this isn't a drama special. It's episode six of a ten episode series, and like episode five, the main problem here is that "Doctor Frost" is expecting us to build up a lot of empathy for a character we've only really just met, and whose relationship to the other characters is only established just now in the context of this episode. The psychological conceit isn't put to very good use either- granted, part of the point is that Doctor Frost and Song-seon only realize what's happening too late. But still.

I did like the pictures. In the greater context of the drama, the exploration of Doctor Frost himself, and specifically why he never smiles at anything, is put to good use. His name has obvious metaphorical implications. The man is just very cold, and shows pretty much no interest in thawing. While this isn't necessarily terrible, Song-seon makes a fairly good argument as to how this is a problematic personality trait for a psychologist to have.

All of these points are mostly undercut by the actual premise of "Doctor Frost"- not the webtoon, but rather the way the drama insists on turning everything into a murder investigation for no good reason. In the webtoon, it was easy to see how Doctor Frost's cold demeanor was off-putting, and frequently caused more problems than it solved. In the drama, it's precisely his detachment that allows Doctor Frost to make the deductions needed to wrap up the current mystery.

Overall, while this is a good individual episode, it's hard to reconcile it with any kind of broader narrative point that the drama has actually been dealing with. Then again, so far there hasn't been much point to "Doctor Frost" at all, so I suppose I can't hold it too harshly against the drama for actually managing to achieve some form of imperfect catharsis by the end. If in the long-term this manages to set up some decent character growth for Doctor Frost and Song-seon, this episode could be the start of something good. It's just that given everything else we've seen so far, I can't be too optimistic on this point.