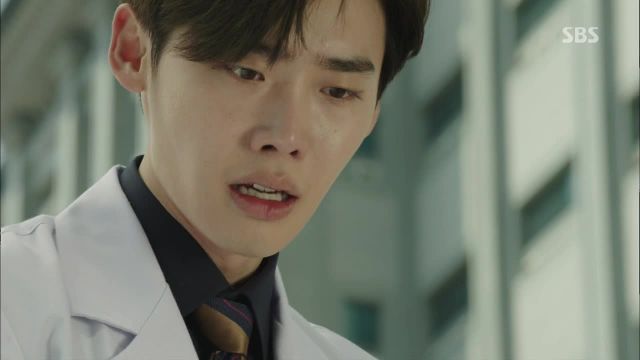 "Doctor Stranger" had a gripping opening. It held flavors of director Jin Hyeok's other works, such as "City Hunter", but it also brought a certain something all its own. Park Jin-wu's writing was a wonderful mix of poignant, powerful, and efficient.

"Doctor Stranger" reimagines and explores the tumultuous relations between North Korea and South Korea beginning in 1994, the time of the historical death of North Korean leader, Kim Il-sung. In a brilliant cameo, Kim Sang-joong plays Park Cheol, the surgeon who saves Kim Il-sung's life and effectively prevents war between the United States, South Korea, and North Korea. He and his son, Park Hoon, are cast off by the South Korean Prime Minister and forced to remain in North Korea.

Lee Jong-suk plays the vibrant, cheeky, cocky, and fiercely loyal Park Hoon who grows up to be a genius surgeon. He is in love with his childhood sweetheart, Song Jae-hee played by the charming Jin Se-yeon. Their sweet love is quickly established through clever dialogue, artful filming, and a sweeping score. Through several dark circumstances they are separated. He is forced to become a surgeon for the North Korean government. She is sent to a concentration camp.

The strength of this first episode lies in how much material it covered and how thoroughly it did so. It addressed how Park Hoon lived from day-to-day in North Korea, falling in love and giving medical care to the poor. It also showed how the North Korean government made him do terrible things while suffering under the country's struggling political, social, and economic state: starving people, political prisoners, medical experiments, power outages. It gave us solid relationships between Hoon and his father, Hoon and Jae-hee, and even between Hoon and his "handler" at the medical facility.

Stylistically, "Doctor Stranger" feels a lot like "City Hunter", but Jin Hyeok's style seems to have more finesse and maturity. The action scenes are clear, and the cuts flow nicely. There are some beautiful quiet shots of locations, intimate moments, and moments of revelation. The music has tastes of "City Hunter" as well, especially with the synthesized strings, but it gears more towards full orchestrations.

Two weaknesses of this first episode lay with the score and with the foreign actors. The music was, at times, overwrought and overwhelming, especially near the beginning. It felt like a pushy attempt to draw me in, rather than letting me fall for the characters and the show more naturally. A minor quibble. The second is that the English-speaking and Hungarian-speaking actors were awful, especially because the Korean cast is stellar. The contrast between the awkward line delivery of the foreign actors and the deft acting of the Korean cast made those scenes painful to watch.

Regarding the actors, Lee Jong-suk was very appropriately cast. He brings a lot of depth to the multi-layered Park Hoon. A lot was asked of Jong-seok in these first scenes. He had to be a romantic and a jokester. He had to show the mental trauma of being forced to live in North Korea and subsequently being forced (again) performing medical experiments for five years. He had to wear a mask of pride and arrogance to survive in the medical center and still feel he had one speck of autonomy. Jong-seok did it all and made my insides churn for him and his situation. Jin Se-yeon was winning in her short time on screen as Jae-hee. Her chemistry with Jong-seok is magical. Her calm, yet playful, energy is the perfect balance for Jong-seok's intensity.

"Doctor Stranger" certainly holds a lot of promise. Thus far it promises to be an intense journey that will make me feel every emotion under the sun. This episode did what a first episode should: it drew me in, hooked me, and made me want more.