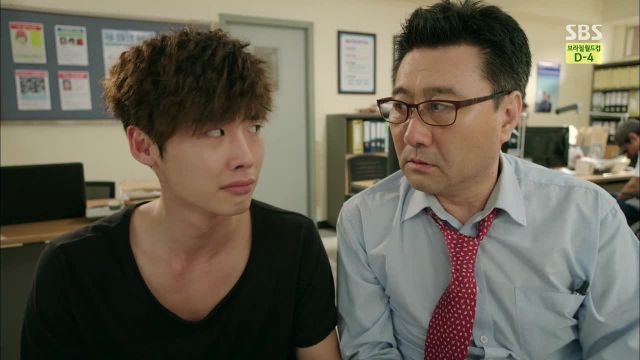 While I personally loved episode 11 of "Doctor Stranger", from a critical standpoint it reeked of inconsistency. What I loved was how cleverly the humor was use, the odd-couple bromance between Dr. Moon and Hoon, the slapstick antics. What puzzled me was the drastic change in tone this episode had compared to the last ten.

The focus of the episode was on the humor and the antics that stem from Hoon's devil-may-care attitude and Dr. Moon's negligible sense of morality. The laughs are due in part to the writing, and in part to the solid chemistry of the cast, particularly that between Lee Jong-suk and Choi Jung-woo. While the laughs are good and well, however, the characters were manipulated a bit too much to attain them. It was humor at the expense of integrity of character development. Also, the humor made the more serious scenes with Jae-joon and Director Oh seem particularly jarring. It was a combination of the disparity between tones and poorly executed transitions.

The other major flaw of the episode was the glaringly obvious use of Korean drama tropes. They had a gratuitous scene of Sistar's Bo-ra in revealing clothing for the sex appeal factor. They also squeezed in cohabitation between the female leads. While the cohabitation had some groundwork laid in earlier episodes, it was still clumsily executed. It's place in Jin-soo's master plan can be guessed at, but it seems silly nonetheless.

What was strong in the episode was Jae-joon and how he faces each crossroads. At each crossroads he can choose the moral high ground, or the road that led Director Oh and Prime Minister Jang onto their paths of corruption. And, at each crossroads, he chooses to tread the darker path. It pushes Soo-hyeon yet further away from him and closer to the much more transparent Hoon. If he is pulled from this path, it will be by Hoon or Soo-hyeon, his competition and his love. The same is true for Director Oh who has a soft spot for his daughter, Soo-hyeon.

Jae-hee still remains a mystery although it seems that her feelings for Hoon are earnest. However, her methods are definitely tainted and seedy. But Hoon is a man who has shown the ability to forgive, so perhaps he'll forget the woman he's spent the whole show looking for and struggling to protect. In a way, he is also protecting Soo-hyeon by giving her the strength to stop seeking her father's (and Jae-joon's) approval. Her self-esteem has shot up since she befriended Hoon and that enables her to protect herself from her father's and Jae-joon's corruption.

I do like that the show addresses malpractice and the sticky red tape that accompanies hospital politics dealing with malpractice. It manages to involve Hoon in a way that is uniquely him: manipulating the corrupt surgical team competition in order to save a patient. I also liked that it finally (minorly) addressed the question of why Hoon is so important regarding Prime Minister Jang's operation. Well, the question was asked. It was not answered. The clues dropped throughout the episode about why Jin-soo wants Hoon to operate over Jae-joon deal with money that North Korea desperately needs.