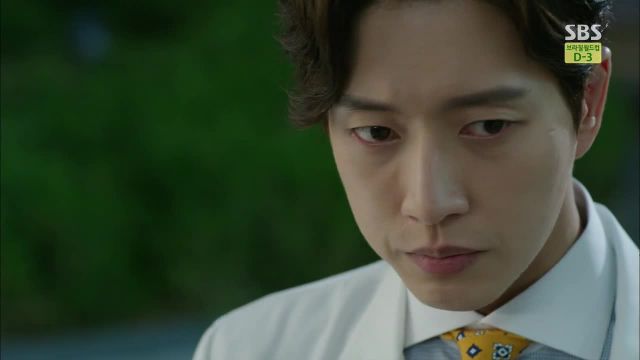 This episode belonged to Han Jae-joon who has been barreling down his path of revenge, ignoring his conscience and the urgings of Soo-hyeon to do what is right. A case that is similar to his own past allows him to see that his single-minded revenge is turning him into  Director Oh - a person who creates orphans and doesn't take responsibility for it. A person who considers the hospital's needs over a patient's needs.

It's been long in coming, but the influences of Hoon and Soo-hyeon and his own past have come together and pushed Jae-joon towards what he really wants to be: a good doctor. Not a person who disregards human life. Part of what pushes him in that direction is the corrupted actions of Director Oh who cares more about saving his hospital from a malpractice lawsuit than saving a patient. The same choice that ruined his family and made Jae-joon an orphan. Director Oh states that in order to win the second round of the competition, the surgery must not be performed. (It is morally reprehensible.) On top of that, Jin-soo steps in and forces Hoon to back away from the surgery or forfeit Jae-hee's life. This leaves Jae-joon in a quandary that requires he choose between the revenge he's worked for his whole life, or to save a patient. Jae-joon expected Hoon to do the surgery and be the doctor he wished he could be, but Hoon steps down. This choice brings about a turning point for Jae-joon: he chooses to be a doctor over his takeover of the proverbial castle.

Park Hae-jin was very effective as Jae-joon and at depicting his inner turmoil. Through most of the drama, his expression have been generally stoic, but in this episode, there was variation from scene to scene that brought Jae-joon's troubles to life.

While Jae-joon finds his moral high ground, Hoon finds himself forced back into the world he left in North Korea - the world where he has to forfeit patient lives. He tried to help the patient by suggesting her for the competition and it backfired. Lee Jong-suk clearly shows that Hoon is mentally back in the nightmarish time in the North Korean medical compound. It's his fight against the catch-22 that Jin-soo and Director Oh have placed him in. It's such juicy characters stuffs that I wonder why it was all saved for this episode. Last episode was so uncharacteristic tonally compared to the rest of the drama. This episode slid right back into the mold for the better, I think. The humor was great, but unfitting.

Jae-hee's deception of Hoon provides wonderful conflict for her character who has become much much interesting since her identity was properly revealed. The deception keeps the audience in constant doubt over how genuine her feeling for him are and how far she can be trusted. Hoon trusts her blindly. I do not.

Jin-soo finally devised a good reason to be in the hospital, which he should've done the first time he entered it. He was very obvious in his presence - security cameras should've picked him up. The logic behind the use of security only makes sense when the plot has need of it. Otherwise, North Korean killer roam the halls freely, dubious actions are not double checked on CCTV, and not one security guard sees the corruption that so openly happens in the halls of Myung Woo University Hospital.

A few secondary character evaluations: Director Oh is too much evil. He is so over-the-top that he's not believable and his hysterics are done in public, which would most certainly land him in trouble. Dr. Moon is wonderfully, hysterically, horrifyingly consistent in his loyalty to no one. His character is actually refreshing in its predictability. Tae-sool, Prime Minister Jang's right hand man, is interesting in the small deviations  his character makes from the Prime Minister's wishes.

We got no closer to the real reason for the Prime Minister's involvement with North Korean affairs. Money has been established as the link between the two, but not much else. Hopefully some of that is revealed while the show is resolving Jae-joon's "betrayal" of Director Oh and Hoon's disobeyance of Jin-soo's orders.