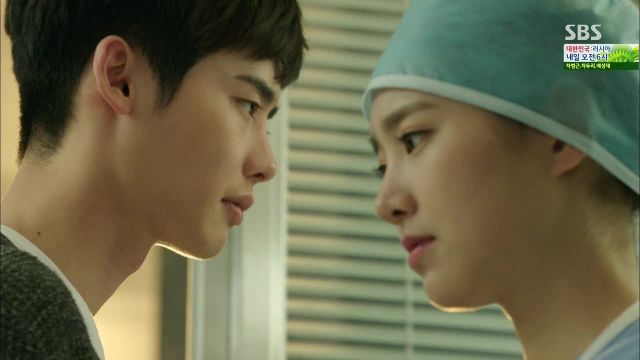 After watching this episode, that's all I can say. After skirting the conspiracy for fourteen episodes, the expectations for its complexity and awesomeness were sizable. All of those expectations were deflated in under two minutes.

The biggest disappointment this episode was how the writing of the conspiracy reveal, the character development, and the plot stepping stones was erratic and sloppy. The conspiracy is basically the product of sociopathic Prime Minister Jang's need for political grandeur. Jae-hee's reasoning for secrecy was not worth the screen time or the amount of tension it was allotted. Park Hoon's sudden distrust of her was uncharacteristic. Soo-hyeon's moping is nauseating. Jae-joon's new found backbone melts with a new reason for revenge. Each major character lacks stability in how they are written. The entire episode felt like a splotchy amalgamation of incongruent ideas smushed together and presented with pretty cinematography and skilled acting.

Elements were recycled for the umpteetth time, like the hospital chase scene. Rather than reusing so many ideas, perhaps the show should've been sixteen episodes so it wouldn't spin on its wheels so much. However, now that the conspiracy has been (however inadequately) explained, perhaps the show can go in a new direction away from the highly immoral surgical competitions and hot-tempered men with power. Maybe it can refocus on the meatier stuffs like Hoon's journey to becoming a good, earnest doctor, Soo-hyeon's path to becoming an independent woman, and Jae-joon's search for justice. Those are real issues that don't need the messy plot twists that have sprouted as of late.

Concerning the other elements of the show, "Doctor Stranger" has always been a visually lovely drama. Jin Hyeok's style is clean and neatly stylized. The color palette is subdued, like the mood of the drama, with sharp edges and a focus on the metallic. It also mimics the weighted feeling one gets when staying in a hospital for a prolonged period of time. It is the music choice that really spices up the show, with its slow Spanish guitar for introspective scenes, syncopated techno beats for the medical competition and well-constructed ballads sung by K-pop idols that liven up confusing scenes. Most of all, though, is that the music doesn't overpower the dialogue or the emotion of the scene.

Aside from that, "Doctor Stranger" needs consistency. It is hard to grow attached to ever-changing characters or feel invested in variable plot lines that recycle overused tropes and scenes. The show has its charm. But charm doesn't always make a show.