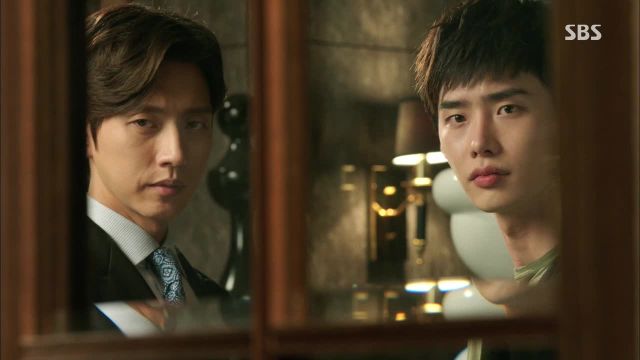 "Doctor Stranger" is on its last dregs as it heads into the final week of its run. There is a lot of action this episode, but it is anticlimactic as the build towards it has gone on far too long - it should've happened earlier.

Much of the fault in this story lies in the planning in that the trajectory changes from week to week and the story has no longevity. The desire for ratings is to blame and the inevitable clumsiness that occurs due to the exhausting live shoot process. What resulted in this episode was that characters changed drastically once again and a few storylines were tied up a bit too neatly. Doctor Yang suddenly saw the error of his ways and resigned, preaching to Jae-joon about how horrible Myung Woo Hospital is and advising him to escape it. The shift in Yang's character was too sudden to be logical.

That same shift happened in Jae-joon and Soo-hyeon. Jae-joon seems to have finally decided on a positive opinion of Hoon, but has not regained his conscience because his revenge moves forward at a frightening pace. Soo-hyeon has found her gumption and lost some of her Hoon obsession in an attempt to prevent Jae-joon from moving forward with his revenge and ruining his life and the lives of others. Had his revenge come sooner, perhaps some of the ridiculous medical competition could've been avoided and his character development for the rest of the drama could've focused on the fallout of such a long-lived and cruel revenge. Instead, the competition turns out to be moot when the president chooses his surgeon. The competition only served to show him which surgeon he preferred. That isn't a good enough reason to make a morally reprehensible medical competition span over the bulk of the drama.

Jae-hee has turned into a self-sacrificing fool despite Hoon's impassioned pleas for her to dream about their future after the ridiculous competition has ended. Instead, she pushes him away with excuses, deluding herself that it is for his own good. Why can't drama couples be open with each other and rely on each other? In this case she could use the ally, and so could he. No one in this show really has a person they can lean on, making them islands unto themselves. A strong pairing is just as winning as an angsty solo hero.

One consistently strong point of the show is the developing relationship between Hoon and his mother. Whatever craziness passes in the episode, Hoon can turn to his mother and receive a comfort he never had before. It's the only time the show has, as of late, shown any real connection between characters. Another strong point of the show is the sound track. It is well mastered and the styles of music played are well chosen. It enhances all emotional beats despite any illogic.

I head into this final week with trepidation. I foresee nonsensical deaths and drama for the sake of drama. I hope to be proven wrong.