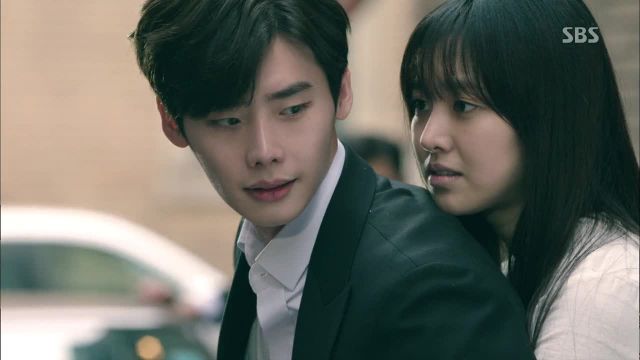 "Doctor Stranger" has a special way of weaving in cinematic, humorous, and moving aspects into one, powerful storyline that is neither choppy nor awkwardly put together. It's an exciting fusion of multiple elements, including a charged political storyline, while still manging to be thoroughly character driven.

The first half of the drama runs much like an action flick. Park Hoon is motivated by his father's death and by the need to save his lost love. He is desperate to escape the North Korean government that traps him. During the rigorous chase through Budapest, the show includes medical, romantic, and action scenes into Hoon's long escape. The chase is basically plotless save for the fact that it reinforces Hoon and Jae-hee's willingness to do anything for each other. That, and it's pretty clear that Prime Minister Jang (Chun Ho-jin) is a selfish jerk who was and is willing to sacrifice Hoon and his father for political advancement. His head of security, Kim Tae-sool played by Jung In-gi, is secretly on Hoon's side because of a small kindness involving a lollipop in Hoon's childhood.

Once Hoon and Jae-hee are separated again, we finally get to meet the characters based in the Seoul hospital (albeit two years after Hoon and Jae-hee's second separation) including second leads Han Jae-joon played by Park Hae-jin and Oh Soo-hyeon played by Kang So-ra. There are quite a few introductions as we are rushed through a cardiac emergency and they are difficult to keep track of. What is sure, however, is that Jae-joon is meticulous, cocky, cool-headed, and a master of his trade. On top of the North-South politics that already pervades this drama, we have hospital politics that try to cater to the deteriorating health of Prime Minister Jang. He has heart issues, which links us back to genius Hoon.

Hoon is driven by the desire to find and rescue Jae-hee. He has forsaken himself in order to do so, going in and out of jail in his attempts to find her. He befriended another North Korean refugee, Lee Chang-i (Yoon Bora) and while he retains his keen intelligence, his tongue has become more acerbic with the added years of hardship and loss. His story is compelling because of his devotion, but also because he can't fight the innate "helper" in himself. He can't stop being a doctor, helping a child set a broken finger, or removing a gangster's appendix. Yes, there is humor and witticism involved, but he remains a doctor. Perhaps it is because of his father's dying request to never forget that he is a doctor, a person who helps people. There is that, and the fact that being a doctor and helping save lives has been Hoon's lifelong dream.

Also, the show doesn't fail to highlight the utter heartbreak that the North/South split has wrought on families, not only on Hoon's, but others as well. They are willing to pay exorbitant prices to get their loved ones. Chang-i had a touching reunion with her mother that motivates Hoon further to find Jae-hee. But he needs money to continue the search and that will fuel a lot of his actions in the future.

The action scenes in the first half of the episode was beautiful. It was clean, tightly choreographed, and the score was appropriately exciting. A few stunts that Hoon pulled were a little out of his league as a cardiothoracic surgeon, but I'll let that slide because the motorcycle stunts were cool.

A fun element that Jin Hyeok has incorporated into his film style is how blood connects two people. When it is spilled, the camera follows the trail of blood from one person to the next. The same smooth transitions are found when Hoon and Jae-hee share intimate gazes. Also, the cuts between Hoon and Jae-hee's frantic escape from Jin-joo and the calm, selfish Prime Minister Jang who is purposefully ignoring Hoon's plight were judiciously timed and juxtaposed.

On top of all of these elements lies the characters. They are so real. Lee Jong-seok brings Park Hoon's pain to life, making me feeling along with him. Even selfish Prime Minister Jang is captivating in how much he is able to disregard human suffering and death in order to reach his goal. Watching Tae-sool serve Jang outright, then secretly help Hoon had me fistpumping in quiet victory.

There are so many things to invest in with "Doctor Stranger". Sure, some of the premise is a bit outlandish, especially with how adept Hoon is at fighting when he spent his life practicing medicine, but that is a small detail. What really gets me is that I can ride the roller coaster of emotions in time with the characters, and when I get to the episode's end, I want more. That is what successful television is. It transports you into the show's world. "Doctor Stranger" has indeed transported me and I want more.