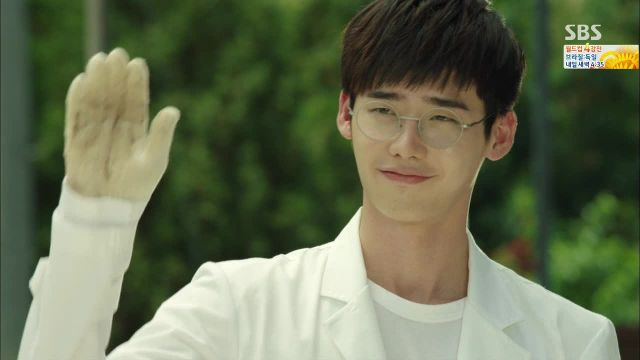 The finale was everything that I wanted from "Doctor Stranger", mostly in that it was satisfying. The bad guys got their just deserts, and the lovers ended up together after many trials and tribulations. However, it makes me wish for better things from the rest of the drama that seemed to have taken a long jaunt down the rabbit hole.

What was missing from the ending was the build up to it. Character development was erratic after the first five or six episodes; the plot was cyclical and relied on wearied tropes and ideas; and the drama, as a whole, lacked logic. The writing seemed geared towards shock value and dramatic effect rather than towards crafting a cohesive story with characters who make mistakes, who learn, and who grow. The story was to have involved North and South tensions and yet there was no overarching political dilemma. Instead, it was a personal battle between Jin-soo, Hoon, Jae-hee, and the narcissistic Prime Minister Jang. The entire political field seemed miniscule compared to what could have been had there been a larger scope. Real political stories have characters and conspiracies that are constantly checked and balanced by the government, politicians, and international relations and policy. Those concepts only cropped up when they were useful to the story rather than serving as a governing force.

Then there are the main leads, Hoon, Jae-hee, Soo-hyeon, and Jae-joon. Each of them began as compelling characters with sympathetic backstories and difficult journeys ahead of them. The first quarter of the drama saw them developing quite nicely, but they soon became tools of the writers to cater to ratings. The characters ceased to become compelling in and of themselves and instead relied on the talents of the cast who were sorely underused. Personalities changed mid-run and in general, the characters were impossible to understand. The lessons that were learned in this last episode felt tacked on to the character profile rather than learned organically throughout the drama's run.

In terms of the final episode itself, it was jumpy. It tried to cover too much ground in too little time. The resolutions that occurred were baffling in that they came out of no where. Director Oh refused to acknowledge his wrongs to the point that he gave himself a heart attack. Yet, with a year's time jump, he has now seen the error of his ways? There was no precedent for this change in behavior, and such occurrences happened with multiple characters. Behavior without precedence. The actual resolutions themselves were satisfying: Hoon gets his woman. Jae-joon finds peace. Prime Minister Jang gets apprehended. But getting there was a confusing journey.

Mostly "Doctor Stranger" just didn't live up to what it could've been. There were so many wonderful ideas that remained unexplored, like the father/daughter relationship between Director Oh and Soo-hyeon. Visually, it was lovely, with beautiful people gracing the camera, but it wasn't enough to ameliorate the confusion brought on by the erratic plot twists. "Doctor Stranger" remains the drama that could have been.