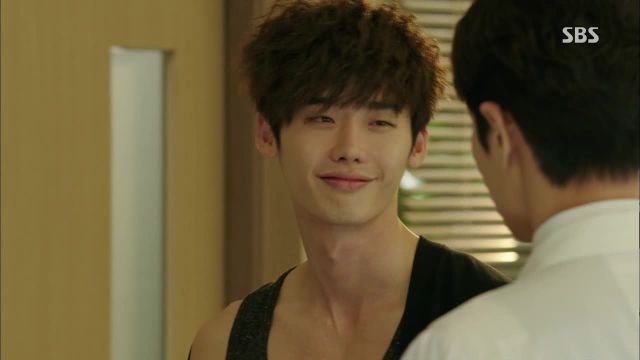 There is a lot about "Doctor Stranger" that requires the viewer to suspend reality and expectations. There is much more that speaks directly to the soul and makes it laugh, cry, and writhe with curiosity. The bulk of that speech is carried by the spot on performances of the cast and how the writing of each character makes them easy to relate to and understand.

Now that "Doctor Stranger" has settled around Myung Woo University Hospital and the main characters have had four episodes of introduction, the story is beginning to settle into the real mystery: Jae-hee's presence in the hospital and why she is there in the first place. Jae-hee under a new name, Seung-hee, has taken up a secret mission from North Korea with Jin-soo as her handler. Her motives are purposely kept vague by the writing and directing, which is one of the strongest aspects of the story thus far. The viewer is kept mere steps ahead of Park Hoon's search for his not-so-lost love. In fact, here intentions are so vague that they could perhaps swing towards hurting Park Hoon. Her behavior regarding him could be attributed to many theories, which makes the show that much more fun to watch. I have several theories about the behavior, most of which center around amnesia and brainwashing and anger about her father's death.

Then there is Hoon himself. His character is the most delightful mix of character quirks that are beautifully delivered by Lee Jong-suk in both accuracy, how quickly he can change moods, and by how powerfully he can portray the complex emotional palette that compromises Hoon's psyche.

Hoon disdains authority while grudgingly admitting the power it has in his life. He deals with conflict by cycling through his emotions like masks, settling on the most appropriate mask for each situation. Most often he chooses his trusty mask of nonchalance. Occasionally, like when pushed by jealous an egotistical Jae-joon, Hoon snaps and shows his true colors: a passionate man who wants to do right by his patients, their families, and his father's dying wish. That passionate man isn't afraid to speak up for what's right even the words will harm him. It is this man he most often hides because it conflicts with the man with a single-minded agenda: save Jae-hee.

Hoon brings the worst out of Jae-joon and makes him fight his jealousy, greed, and ego. Hoon makes Jae-joon more interesting as a character than he would be in isolation. Park Hae-jin's layered portrayal of Jae-joon's angst also goes a long way to spicing up the character. Jae-joon is a typical Korean drama male who is after power and affluence. He wants to marry Soo-hyeon for management rights to Myung Woo University Hospital. That desire conflicts with his genuine feelings for Soo-hyeon and it makes his intentions as unclear as Jae-hee's. Is he using Soo-hyeon and quashing his feelings to do so? Is that question really so black and white? For example, instead of choosing to perform a very dangerous surgery on Soo-hyeon's mother, he chooses the safer route in order to guard his position. That is a career-minded choice. However, the guilt that hangs over him is immense. The moral dilemma makes his character more fascinating.

Soo-hyeon's introductory story arc has reached it's conclusion as she learns her mother really did care for her through some information from Jae-hee, who was her doctor before she died. That conclusion blends in with the start of her new quest to help Hoon find Jae-hee. It was a nice use of both women's stories to create plot twists and just good ol' television mystery. Her character is interesting in that she is a chaebol's daughter, but she is also quite powerless despite her money, position, and career. She has to fight tooth-and-nail for what she wants and turns to Hoon for comfort and a strange sort of friendship because she sees her suffering in him. That, and Jae-joon acts very selfishly. In that sense, I hope this show keeps them romantically paired because their growing processes could positively affect the other.

In the political arena, not much has happened yet. Each episode takes pains to remind us that Prime Minister Jang is there, he has evil intentions, and he is just waiting for a chance to act. There is some antagonism between him and President Hang (Kim Yong-gun), which should grow to be interesting. North Korean bad guy Jin-soo also has some stake in the political dealings. All the pieces are set, but have not yet been moved. I'm glad for it because there is so much character development and hospital movement happening, that political additions would be too much.

A few things are unrealistic, like Hoon's incredible ability to diagnose a patient by laying his hand on their chest. Or, the convoluted happenings that brought him and Jae-hee to South Korea. However, the lack of realism there is more than made up for by the emotional potency of the show. And it's beauty. PDnim Jin Hyeok really knows how to use light and the spaces on his sets well. I just wish he'd swirl the camera around his characters less. If something important happens, I know he'll take a nice little trip around the character with his camera.

With all of that said, I'm anxiously anticipating episode 6. This show is fun to watch and fun to write about.