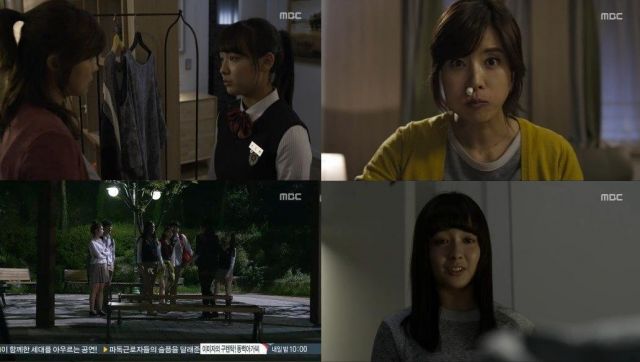 Min-joo (played by Yoo Sun) is all about self-reliance. She's just come back from a ten year trip in Africa, having written a book about her experiences there in an alien land. Her philosophy seems like a pretty good one abstractly- but in order to go on this adventure, Min-joo left behind a daughter Do-yoon (played by Chae Bin). The now teenage Do-yoon does not feel especially inspired by her mother's motivational story. This may have something to do with her own issues of feeling abandoned- and the way she's bullied by the mean girls at her school.

This drama contrasts the extremely romantic, pro-active viewpoint of what Min-Joo represents as a woman who went into the literal jungle with that of her Do-yoon, who lives in the metaphorical jungle of high school. For Min-joo, being free from responsibilities represents freedom of the highest order- for Do-yoon, it means being free from emotional attachment. It means the fear of becoming abandoned again. The drama takes an unflinching look of how traumatic separation can affect a child years down the line, and comes up with a portrait of a relationship that can probably never be fully salvaged.

Min-joo does confront Do-yoon's tormentors at school, essentially doing all that motherly protective stuff she could have been doing but chose not to. But the drama notes the problems with this. Min-joo is trying to force a quick genre-friendly resolution through the power of her own personality onto a situation that's too long term for such a scheme to work. Everyone knows that Do-yoon's mom is just going to leave again- and then what? Then what will Do-yoon do?

The ending to this drama isn't as bleak as this review makes it sound- Do-yoon does find a sort of answer for herself, and even if it doesn't solve the bullying or the abandonment issues, it's at least something. But it's a very bittersweet resolution presaged on the assumption that Min-joo is not a person who can be relied on. What's especially sad is that Do-yoon does, clearly, still love her mother. It's an unconditional love that's very painful for her, because Do-yoon has so many valid reasons to resent the woman.

But Min-joo herself is aware of all this, and that makes all the difference. She loves her daughter, too. "She's got a funny way of showing it", the cynic might add, noting the ambiguity of the overall situation. But then, that's the price of independence and independent living. "Drama Festival - Surviving in Africa" takes tropes related to the ideal progressive woman and spins a very politically incorrect, very emotionally honest story about the drawbacks to this kind of thinking. All either of these women can do is expect the worst and hope for the best. While not ideal it's nonetheless a survival mechanism that can span either jungle.

"Drama Festival - Surviving in Africa" is directed by Kim Ho-yeong-I and written by Kim Hyeon-kyeong and features Yoo Sun and Chae Bin.