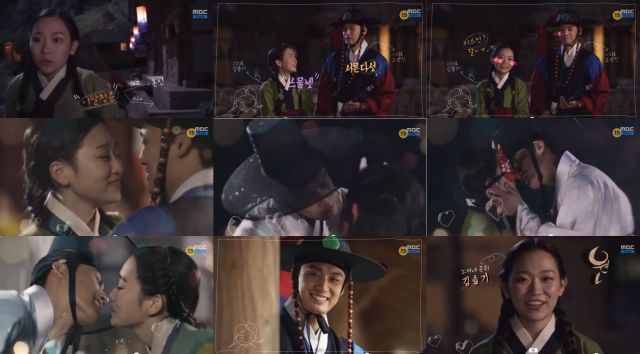 The main characters of "Drama Festival - The Diary of a Resentful Woman" are a posse of young women in their early twenties who act bratty and free-spirited. The main twist is that the story takes place in Joseon times. So their behavior seems like an obvious anachronism, especially when taken in concert with the obviously modern soundtrack. The tone is a celebration of the crazy wackiness of youth and how everybody devotes all their energy to having a fun time.

Personally, be it today or through the looking glass of time, I don't particularly care for these kinds of women. Even when I was younger they mostly just came off as annoying. If you don't find the main characters charming from the get-go, they will just continue to be the same level of annoying throughout the entire hour. The plot does have general pretensions about the importance of love and friendship. But the message is more about the importance of faith and dedication than it is about their behavior being wrong somehow.

Social class also takes on an important element. While the three main characters are all Joseon-era women, they're all in totally different social classes. An important plot point is made concerning shoes, completing an obvious Cinderella allegory. With a tone this anachronistic, I suppose the drama might as well toss in a fairy tale romance. Even if the ultimate conflict ends up being surprisingly gloomy about the kind of dismal reality people can expect when they get on the bad side of a debt.

There's nothing all that explicitly bad about "Drama Festival - The Diary of a Resentful Woman". It's just that...well, I didn't really care that much. This drama has a lot of the same problems as "Venus Talk". This is the story of a bunch of women eagerly going after their own self-gratifcation so...what? I'll grant that the presence of an actual conflict, as well as the greater theme about social fealty at least makes the drama a lot more engaging than it's big screen counterpart. That's still not a huge compliment though.

Still, I may be regarding "Drama Festival - The Diary of a Resentful Woman" a little harshly, owing to personal taste. The concept is interesting and the script is fairly well-developed. There's decent self-awareness regarding their lack of a particularly appealing personality. And the epilogue too is a mostly fun little reminder that they all do have to grow up sooner or later. That much is probably worth a mild recommendation. While the fantasy is a little annoying, at least it's not overbearingly so.

"[HanCinema's Drama Review] "Drama Festival - The Diary of a Resentful Woman""
by HanCinema is licensed under a Creative Commons Attribution-Share Alike 3.0 Unported License.