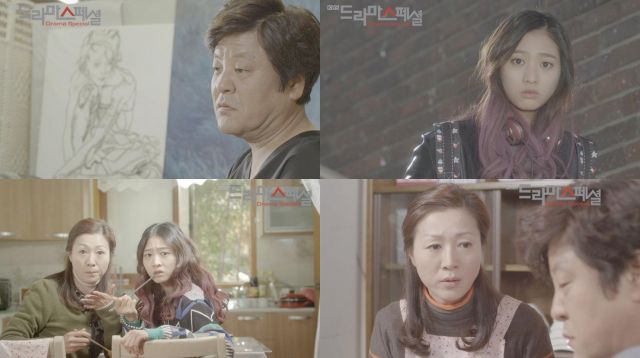 In order to supplement his family's dwindling income, Tae-Joong (played by Sung Ji-ru) ends up having to take a job as an artistic model. He gets this job more through connections than from being in any way well-suited for it. The problem isn't that Tae-Joong is unattractive, but rather that he has a crippling shyness as regards being seen naked. And this only intensifies once an unexpected person discovers his new gig.

The emotional center of this drama rests on the extent to which we sympathize with Tae-Joong's dilemma. And honestly, I didn't really feel it. Yes, the guy is shy, easily spooked, and rather clumsy. But this isn't really enough to hang an entire story on. A more effective supporting cast is needed here to supplement the proceedings and keep the action interesting. Yet outside from some very piecemeal roles in the overall narrative, none of them really have much to do.

Let's take Tae-Joong's wife, Mi-Ra (played by Bang Eun-hee). She's a sweet, affectionate, likeable woman, and a lot of the dramatic thrust here is about how Mi-Ra is unaware of her husband's new job. So consequently, when she catches him watching The Full Monty for inspiration on his current dilemma, Mi-Rae's reaction is entirely unlike what is appropriate for the overall storyline. And this works really well. I was honestly excited waiting to see her try to enact her plan.

And then it fails, and from that moment on the impact of the drama just derailed for me. This concept needed more comedy, more laughs- it's about a middle-aged man doing nude modeling, for pity's sake. That much should be implied. But we just end up with more dramatic handwringing over how Tae-Joong is supposed to resolve the whole complicated situation of his own bashful feelings with having to lie to his wife and daughter. The seriousness is laid on too heavily, and so feels overbearing.

Perhaps on some level the problem here is just that I couldn't really identify with Tae-Joong's character. His attitude is just exaggerated enough, and the drama just extreme enough, that a lot of the situation feels forced. What comedy there is here works pretty well, particularly when we see Tae-Joong in a familiar element rather than the unsettling world of public nudity. Unfortunately "Drama Special - Daddy's a Pervert" just doesn't strike the right balance between all these varuious chords, and as a result the final product is a fairly disappointing one.