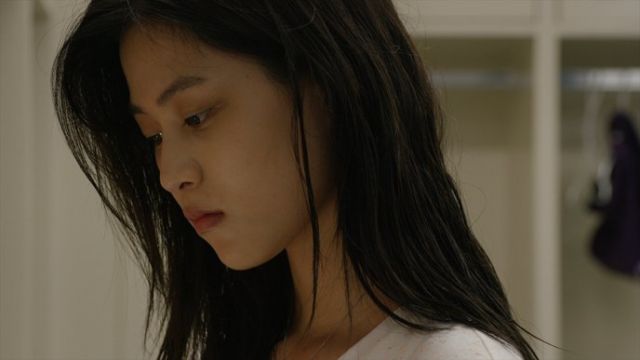 Seung-hee (played by Lee Soo-kyung-I) is a pole vaulter. Pole vaulting is one of the more gimmicky Olympic sports- basically you use a pole to leap over a high bar. Like all obscure Olympic sports, it's something the athletes do more out of love than glory. And even though Seung-hee is a fairly talented athlete, she's starting to break down in frustration about no longer being at the top of her game. Her parents, having met because they too were pole vaulters once upon a time, help Seung-hee out by getting her a spot with top coach Jin-ah (played by Kim Hee-jung-II).

The main awkwardness about "Drama Special - Finding Argenta" is that it never really commits to any specific theme. Seung-hee's difficulties as an athlete are glossed over- a catty relationship with fellow younger pole vaulter Na-ri (played by Hwang Se-on) ends up not having that much push. Seung-hee is more suffering from generic angst than she is any specific problem, which somewhat hampers the payoff of the ending.

The closest the drama gets to a consistent hook is by dealing with parental issues. They're not especially serious parental issues, but they do get at the heart of a serious question- how much should a person be willing to give up to become an athlete? Is all the stress involved really worth it? Does Seung-hee actually even like pole vaulting all that much, or is she just pushing forward because of general inertia and her parents' relationship to the sport?

It's not a question the drama answers all that convincingly. Although really, in that vein the sport in question being pole vaulting rather than something more obviously glorious is really a big part of the point. The big climactic track meet at the end barely even has anyone in attendance. But then Seung-hee's decision to go for serious athleticism can't be based on what other people think. It has to be because of what she wants. How much should Seung-hee be willing to sacrifice to be the best?

"Drama Special - Finding Argenta" ultimately defines itself on that much broader question. And I appreciated the emotional sentiment beyond that. In feminist discourse it's all too easy to pretend like these kind of serious life questions have easy answers and that society is who's really to blame. Yet the execution here isn't perfect. "Drama Festival - Surviving in Africa" dealt with similar subject matter awhile back to better effect. Even so, while "Drama Special - Finding Argenta" may not be perfect, at the very least it's still pretty good.