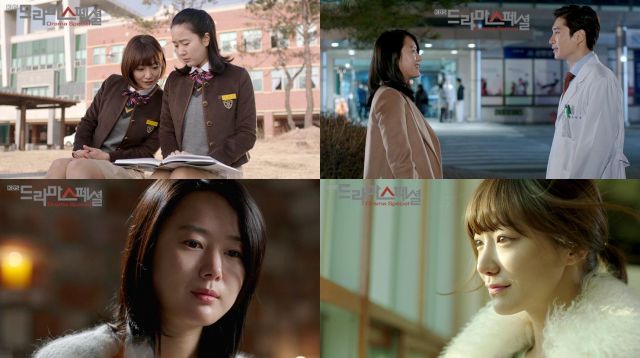 The head tilt is the best part of this drama by a wide margin. There's an extremely creepy aspect to the way Ha-jin (played by Yoon Jin-seo) and Yoo-jin (played by Shin So-yul) angle their bodies. It lends an unsettling dimension to the latter woman's murder investigation. Take the opening scene where Detective Park (played by Kim Min-sang) wondering what to make of the strange position Yoo-jin's body is in. There's an effective horror aesthetic going on here that makes for a wonderfully chilly feeling.

Unfortunately "Drama Special - Jin Jin" is not a horror story. It soon becomes clear that the narrative is actually an emotional mystery centering around why Ha-jin killed Yoo-jin. Any notion that Ha-jin is not responsible for Yoo-jin's death is cleared pretty early on, robbing the storyline of any real dramatic tension. As a result pretty much all the emotional resonance lies on the strength of the performances of the actors- and this, sadly, is too mixed to be of much use.

For what it's worth, I really enjoyed Shin So-yul's performance as the doomed woman. For obvious reasons all of her scenes are in flashback, but we get a clear portrait of a person who tries as hard as she can to brighten everyone's day. She's not terribly successful at it, and to a large extent her failures on this front are what lead to Yoo-jin's untimely demise. It's an interesting, sad situation, and Shin So-yul really brings it to life- her excellent unsettling head tilt only helps matters.

By contrast, Yoon Jin-seo is a dead weight- and it's the lack of energy and real empathy in her performance that really drags the drama down, because when we get right down to it, this is Ha-jin's story. Nearly every single scene is either told from her perspective or deliberately keeps Ha-jin's perspective in mind. So the fact that I didn't really care about what she was feeling is problematic. On a basic level, I'm not even sure why she killed Yoo-jin. I mean, I know the reason- it's just not a terribly convincing one.

Kim Min-sang does a decent job as Detective Park- it's not fantastic work, but good enough that the drama might have benefited more by having him as a perspective character. As it stands, "Drama Special - Jin Jin" only really uses him as an excuse to have other characters toss out exposition. The other actors don't really warrant mentioning. This drama really needed more genuine emotional spark. Without it, the final product feels pretty hollow, and consequently just isn't worth seeking out.