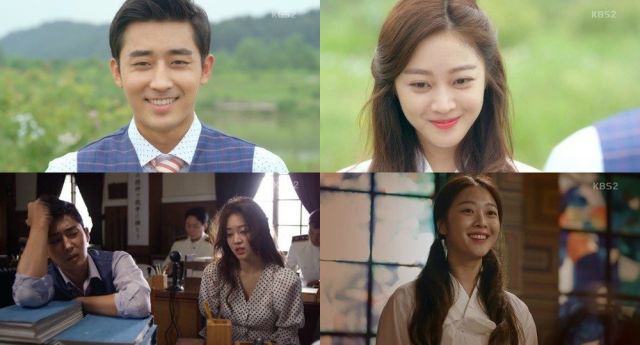 An opening disclaimer makes a point of assuring us that "Drama Special - Let's Meet, Joo-oh" is a work of fiction. At first I was confused about why this needed to be stated explicitly, but the reasons for that become clear quite quickly. The year is 1937. The Japanese Occupation of Korea is at full swing. Joo-oh (played by Son Ho-jun) runs a matchmaking service and Soo-ji (played by Jo Bo-ah) is a young woman from the country trying to get her a man.

Had "Drama Special - Let's Meet, Joo-oh" just focused on this odd, if original premise, it probably would have been fine. After all, the costume design is excellent. I especially liked how we could tell from her first introduction that Soo-ji's simple traditional Korean clothes are ridiculously rustic compared to the vibrant fashion of nearly every single person she runs into. Jo Bo-ah is also an excellent model for when Joo-oh has to repeatedly change her outfit into something more attractive.

Philosophically speaking too, the entire tenor of the thirties dating scene is oddly believable. It does not, in strictly literal terms, differ that much from modern matchmaking, but that's to be expected. Modern Korean ideas about courtship came from exposure to foreign cultures during the Japanese Occupation period. When Soo-ji talks about being a romantic novel fan, it's easy to see this as being just a previous generation's version of being a romantic drama fan.

But...and I finally get to the but here, the plot inevitably runs afoul of the comfort woman issue. And there really is just no tasteful way to address that in the context of a screwball romantic comedy. From a screenwriting perspective the final plot turns are well done- we have two groups of characters in two different areas working to resolve the situation, one directly and the other through a stalling tactic. The comic relief is well done.

The problem is that knowing, as we do, the greater historical context, it's hard to look at the story's overall treatment as anything more than a rather crass way to force a traditional good guys bad guys climax in a story that up until that point had been far more mundane. When "Drama Special - Let's Meet, Joo-oh" works, it is primarily as a period piece. As strong as the overall production is, I really wish director Kang Min-kyung-I and writer Kim Eun-seon had been a little less ambitious, and just focused on the inherently humorous aspects of the story.