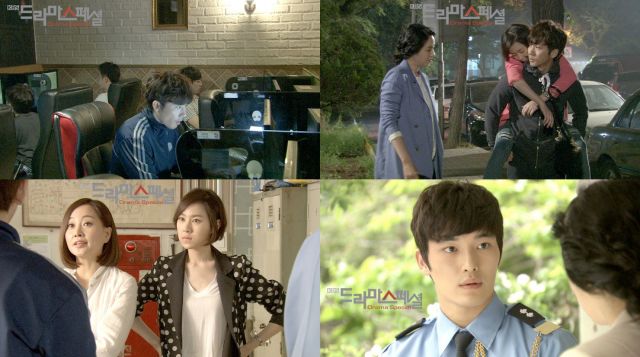 In this low stakes mystery, members of an apartment complex conspire to find out who has been leaving random bags of trash outside of the neighbors' doors. And people get very, very angry. After all, trash is unhygienic, and it's everyone's responsibility to throw away and sort their own trash. To give other people your trash and expect them to throw it away is just plain rude.

This may not sound like compelling drama, and I'll be honest here- "Drama Special - Night Watch" isn't really high art however you look at it. But it's an interesting story if only for its normalcy and relatability. Who hasn't wanted to take up farming equipment, check the surveillance tapes, and find out just who keeps leaving those blasted unsightly messes around the neighborhood? There may not be a law against it, or even an ordinance- but to normal folk who live fairly unremarkable lives it's terribly annoying.

While most fiction is wish fulfillment this drama is relatively unique in that it sets up a mystery where the stakes are low enough that we can actually identify with the characters involved. The tenants of the apartment complex are a relatively diverse. There's a stay-at-home dad with too much time on his hands while his beleagured wife has to go through the daily grind. An older couple who are having a new child even though their current one is well into his teens. A working woman who doesn't much care about this community stuff (but hates having to deal with trash). Others I'm sure I'm forgetting.

The mystery as well is competently constructed, and takes advantage of the general normalcy of the setting. Suspicious characters are identified, but their reasons for skulking about the apartment complex are relatively mundane and nothing so petty as leaving random trash bags everywhere. A bit of a fun reminder of all the weird gossipy discoveries a person may make if they form an action team that just hangs around at night looking out for weird stuff.

All in all this drama special is cute, different, and just interesting enough to be worth passing time with for general mystery fans. None of the characters really resonate on a level beyond the archetypal, but that isn't really important for this kind of story. Just like in real life, when someone in the neighborhood is making a point of harassing everyone else anonymously for no apparent reason, there's more important games afoot than character development.