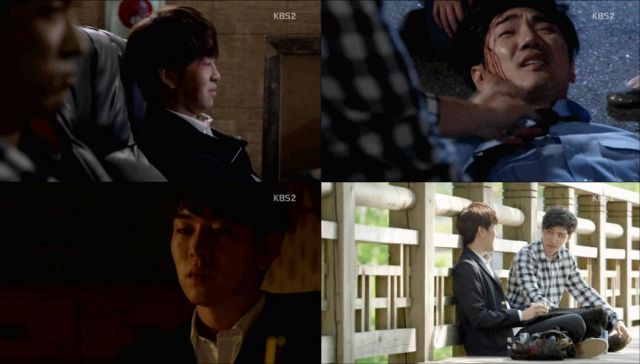 At first glance "Drama Special - Pitch Black" appears to be a pretty shamefaced attempt to gain dramatic capital by dealing with a tragic event and just having all it characters mope around in general despair. There's certainly enough of awkward stuff to attack it on those lines. The high school students are the worst of it, mainly because none of them look like high students.

It becomes clear over time, though, that the characters themselves are just as disappointed in this turn of events. There's nothing here that could be called fun, or anything that really lends itself to emotional catharsis. Fights break out, except they're not really fights. It's just lashing out at a cruel, unfair world. Some people cope by beating others up. Others are fine with being beaten up. Either way, nothing is really solved.

From a technical perspective, the bus scenes are the strongest, because these are the ones that give the clearest sense of characters so horribly desperate to get back to normal, but knowing that it's probably never going to happen like that again. We never really talk to bus drivers, or acknowledge them as people. Just a simple greeting will do. So it's all too easy to envision why the characters in this drama have just as much trouble coming to grips with the fact that the system failed, an it's not really anybody's fault, but there's is someone they can yell at.

There's not really any ignoring the essential cliches in "Drama Special - Pitch Black". It's just accepting the fact that these cliches exist for a reason, and that a plot being hackneyed doesn't make the proceedings any less tragic for the people involved. All of the main characters desperately try to cling to some concept of a villain, even though they know one doesn't exist, just so that there's something they can aim their anger at.

It's against this backdrop that the characters eventually come to peace. It's not a terribly effective peace. It's pretty obvious that the nightmares will continue, and there will never be any recovery, and it's only in accepting this that they can move on from the tragic accident. This sense of permanence is immensely sad and disappointing. I, at least, felt a fair amount of despair just taking all this in, and feeling emotional for all my prior cynicism. While "Drama Special - Pitch Black" may not have much polish, it certainly has plenty of heart.