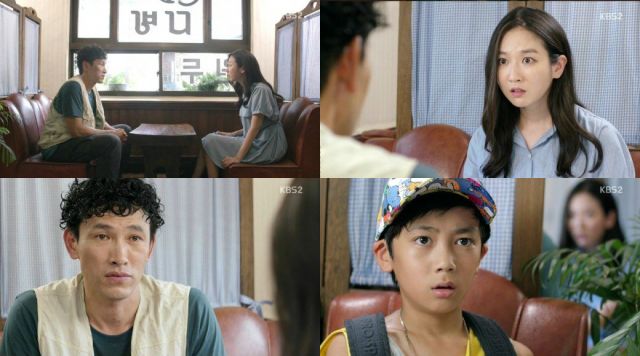 Dong-gil (played by Choi Kwon-soo) lives with his father Gook-jin (played by an unusually not-scary looking Yoo Oh-sung). There's no mother in the picture- but there is a younger brother Yeong-gil (played by Park Isaiah). As you might have guessed by the name- Yeong-gil isn't quite Korean. Sure, he speaks Korean, and has a Korean name. But it's obvious to everyone who looks at Yeong-gil that he's the son of an African-American soldier. A frustrated Dong-gil works out his frustrations by getting involved in dance, with Seo Taiji as his idol.

On the most basic level "Drama Special - The Brothers' Summer" is about the meaning of family. At the ripe old age of eleven, Dong-gil is convinced that he's going to find his way in the world- and if that necessitates dumping his brother-who's-not-really-a-brother, so be it. There's more important things in life. Like screaming fans. Of course at Dong-gil's age the fans are just eleven-year-old girls but still. It's adorable.

But more seriously, as a coming-of-age story, Dong-gil is moving away from a father he consistently considers to be an embarassment and insteads comes closer to Seo Taiji. The fact that Dong-gil does not know Seo Taiji personally is besides the point. Seo Taiji is aloof and cool. Gook-jin constantly wears these goofy expressions on his face that makes him look like the perfect target for a con. And yet by the end we find out that Gook-jin has been holding an important secret close to heart that neither of his sons could have possibly guessed at.

How does a man with no discernible poker face maintain a secret this big? Well, because Gook-jin's not really lying. He genuinely, seriously loves both of his sons. Remember that this is the early nineties- no one would hold it against Gook-jin if he just didn't want to have anything to do with Yeong-gil. But Gook-jin isn't the kind of man who thinks like that. He has honor.

And that's pretty much what "Drama Special - The Brothers' Summer" comes down to overall. The revelations, while not especially visceral, are quite sweet. What's more, director Lee Jeong-mi has a good eye for what really makes kids grow up- it's not their love of music stars, but the little schemes they go through to help each other out. It's about appreciating the unconditional love of a family member who doesn't care how stupid they look helping out someone they care about. The sentiment is a sweet one, and makes "Drama Special - The Brothers' Summer" well worth watching.