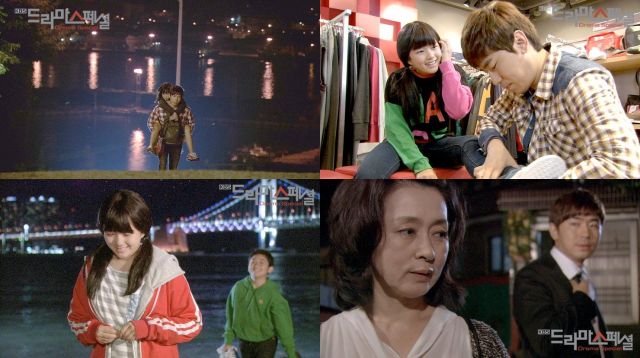 Eun-soo (played by Jung Ji-so) is a fairly normal young teenage girl. She has her own peculiar interests, a general desire to find and express who she is as a person, and a somewhat annoying older brother by the name of Eun-gook (played by Lee Si-eon). However, rather than teasing her, as is the normal province for older brothers, Eun-gook feels like more of a parent- there's an authority to his attitude that stifles the younger sister.

It's against this backdrop of teen spirit that a revelation appears, ready to do serious damage to this relationship between siblings. Eun-soo's attitude is understandable- she needs someone to lash out against, after all. And that's the basic direction "Drama Special - The Ugly Ducking" takes. It's a simple tale about finding out what family really is, and discovering that biological identity, while influential, isn't as important as a genuine emotional connection.

Let's take Eun-gook's character. While the emotional quotient of the drama focuses almost entirely on what Eun-soo is going through, Eun-gook seems to have long since made up his mind that Eun-soo is his sister, and that's all that matters. Even when he's being bossy and totally, like, ruining her life, Eun-gook is constantly there for Eun-soo and the concept of him not doing that is just completely beyond the pale.

Eun-soo consistently behaves in a very bratty, unlikeable way. But because of the context of the situation, as well as the fact that she is, after all, just a normal teenager, this feels forgivable. I didn't particularly like Eun-soo, but I did understand her. And it's clear by the end that she understands herself, too. When Eun-soo apparently arrives at the answer she's been seeking for most of the episode, it's quickly exposed as an utter disappointment. It's not the traditional happy ending Eun-soo had been hoping for.

Regardless, it's still an acceptable one. "Drama Special - The Ugly Duckling" isn't a particularly exceptional piece of work- it goes into dramatic territory that's been done before with relatively little flash or backstory, so that the emotional resonance left behind isn't too strong. It's still an effective work, though, that accurately underlines the frustrations of adolescence with a reminder that love is not so simple an emotion that it can be easily logically explained.

"Drama Special - The Ugly Duckling" is directed by Sin Hyeon-soo and written by Choi Ha-neui and features Lee Si-eon and Jung Ji-so.