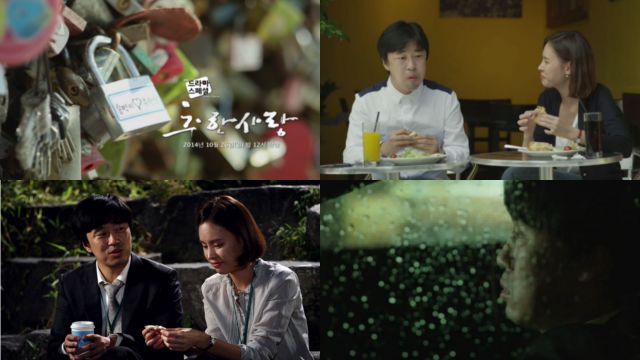 At first glance the title "Drama Special - Ugly Love" appears to refer to the less-than-handsome physical appearance of Han-sang (played by Jo Dal-hwan). Actually, the drama's subject matter is much darker than that. Han-sang is the gopher to Yeong-cheol (played by Kim Young-hoon), an attractive playboy executive who utilizes money, charms, and Han-sang's ideas for romantic gestures to use women until he's bored with them, at which point Han-sang cleans up the mess.

Love is literally ugly in this drama- and that's what makes the action here so intense. "Drama Special - Ugly Love" has a profoundly cynical take on the idea of modern romance. Han-sang finds himself face-to-face with indisputable evidence that emotional sincerity means absolutely nothing- women can be easily persuaded that a pretty face with money is a good romantic match. By contrast, the homely lower earning Han-sang will never be able to compete with that. Never mind on the romantic level- even if he wanted to Han-sang can't break the illusion Yeong-cheol presents. He's the man for the woman who wants it all.

While there are obvious misogynistic undertones here, what really sells this drama is the honestly downtrodden emotional state of Han-sang. He's not just a victim here- in the end Han-sang takes himself to task for the fact that he's been enabling Yeong-cheol's behavior. Ultimately he ends up admitting that he does, in fact, hate women. He hates that they never give him the time of day, he's disgusted that Yeong-cheol's scam works perfectly every time, and it is, to him, a sort of poetic justice that these women consequently be punished for their unreasonable fantasies.

What prevents Han-sang from coming off as vile is the sheer sincerity on display in the performance of Jo Dal-hwan. Han-sang is, in fact, a good person. Or at least he tries to be. Well, honestly, it's only after the apex of the story's conflict that Han-sang genuinely acts in a noble way, and not even for a very good reason. But he's capable of learning from his mistakes- even if in the long view the women probably deserved it. At times it's hard to understand how Han-sang can even sympathize at all with a person who treats him with mistrust and aspersion solely because he's been honest with her.

Only a few weeks I had biting criticism for "Haemoo" because of its overly sympathetic treatment of the nice guy archetype. What makes "Drama Special - Ugly Love" so special is that it actually provides a compelling, mitigating argument for Han-sang's behavior. It's not that women deserve to be hated. It's just, to a guy like Han-sang, women obviously don't respect him. So why should he respect them? It's an incredibly complex moral question that the drama navigates superbly, making "Drama Special - Ugly Love" must-watch television.