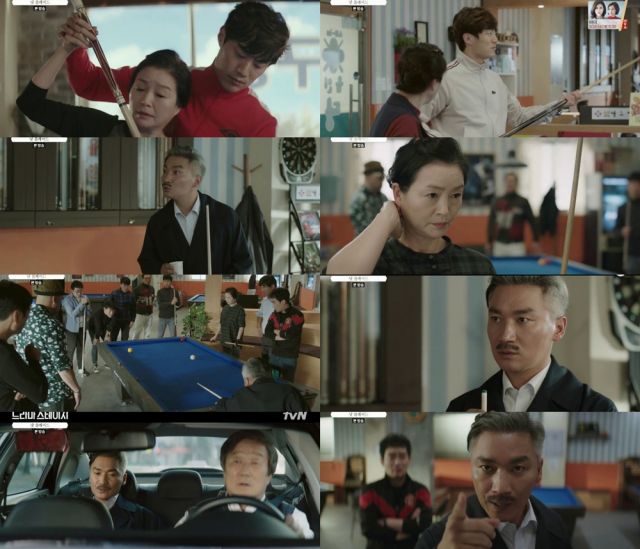 In-sook (played by Won Mi-kyung) is a grandmother with a real excellent knack for geometry. Sadly, this skill set has been unexplored for most of her life, as In-sook has lived as a normal housewife. Then she gets a job as a cleaning lady for a local billiards hall. Business is slow, so In-sook practices the game while no one else is around. Before long, she's lining up excellent shots, easily hitting as many as five sides at once

That's pretty much it. "Drama Stage - Not Played" is the story of an older woman who learns she is really good at billiards. While the drama initially intrigues with its unusual premise, it is ultimately badly damaged by a lack of story or character arcs. You might expect "Drama Stage - Not Played" to have its climax at a big billiards tournament, and there is indeed a big billiards tournament in the story- but we don't actually get to see it. The drama cuts away right when the tournament is about to start, and we're simply told the outcome in the credits as an afterthought.

Thematically the tournament doesn't necessarily matter, if this is a story about In-sook coming to see more value in herself. But that angle doesn't really work either. For most of the drama's runtime In-sook's family simply isn't paying attention to her hobby. It takes an incredibly contrived situation that is explicitly noted to not be In-sook's fault to so much as give them an excuse to be angry at her, and most of them don't even take it.

"Drama Stage - Not Played" could also be a story about In-sook's relationship with Seong-wook (played by Lee Hee-joon), the manager of the billiards hall who takes an interest in her skills. But his character is very thinly drawn. For awhile it's unclear whether Seong-wook is actually passionate about billiards or if he's just a hustler who sees In-sook as a means of making money.

Most of these issues could have been significantly improved if writer Kang Min-soo had made an effort to put in more clichés, rather than trying to so hard to avoid them. The billiards aspect is by far the most interesting one here, yet receives little focus compared to the humdrum daily lives of the main characters. Moreover, weak motivation makes it difficult to root for any of those characters to succeed. While not bad, "Drama Stage - Not Played" could have been much, much better.