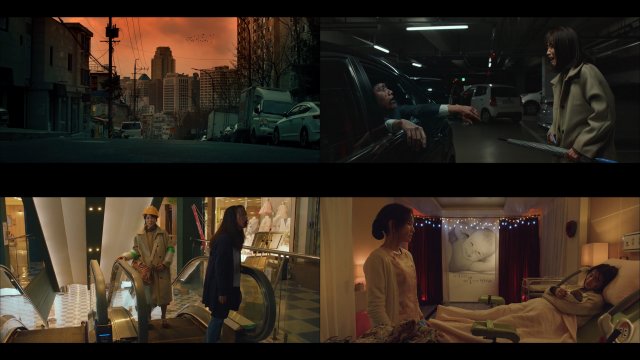 Zombies aren't realistic. Physically speaking, being a zombie is kind of like having rabies, in that it makes a person go mindless. A person with rabies is dangerous, but not like, apocalyptically so. Just don't get close to any animals with rabies. I bring this up because "Drama Stage 2021 - On the Way to the Gynecologist" has a novel approach to the genre. Its zombies are slow. A pregnant woman can very slightly outrun them. Which is a problem for Hwa-yeong (played by Park Ha-sun), as she is a pregnant woman.

Hwa-yeong is an interesting character beyond just the black situation comedy she finds herself in. Early on we're treated to a wall of loving notes from her husband, imploring her not to exert herself and to let him handle errands whenever possible. Later on we discover that he had a less than noble reason for this advice. But I digress. Hwa-yeong is so emboldened by the prospect of going to the gynecologist's office by herself, she doesn't let the zombie apocalypse deter her in this quest.

Hwa-yeong has quite a bit pluck, so to speak. So does nurse So-jin (played by Bae Yoon-kyung), who has to motivate herself from just hiding from the zombies to actually making an effort to clean out the gynecologist's office. Both of their situations involve a great deal of farce and deliberation. When the zombies do become threatening in the latter parts of the story, it's largely due to contrivances.

The breakdown of society, less than the zombie apocalypse itself, is the real conflict. Hwa-yeong has complete and utter faith in the social contract despite its complete and utter collapse. Maybe that's just the hormones speaking for her, but it's a genuinely inspiring outlook. Even when faced with grim reality Hwa-yeong does not succumb to despair. She just focuses on what works, deciding to do right by her child no matter what the future may hold.