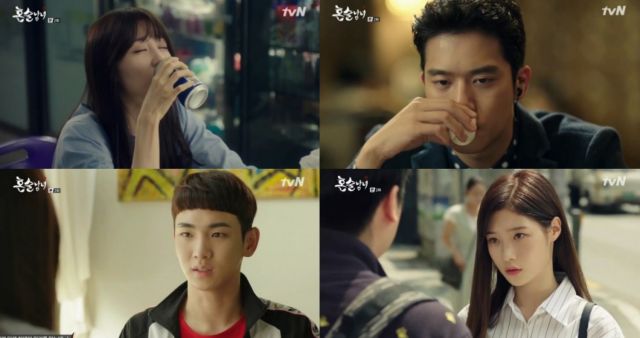 Now that the basic shock of the premise has worn off "Drinking Alone" isn't quite as interesting as it was initially, although there are still plenty of moderately engaging bits. The production team appears to be sticking with the format of framing each episode around Jeong-seok pointedly enjoying his quiet peaceful meals. This is more a point of comparison than it is a matter of plot, because the absurdly stressful situations that pop up at work really are best dealt with via silent time alone.

I'm not using "absurdly" as a superlative, but rather as a technical descriptor. However we look at the situation, it's uncanny how every character at the academy seems obsessed with technical factors that have almost nothing to do with the academic subjects they discourse about. A big point is made about the difference between the way a teacher looks in an airbrushed photo and how they look in person.

There's always a decent discussion to be had over how good marketing is by nature misleading. Burgers never look as big and delicious as they do in ads, after all. But this is a completely ridiculous rubric to apply to a person whose job is to be a smart person. Interestingly, it's the students who bicker over this point more than the teachers themselves, which provides a stark reminder how the entire concept of the academy is fundamentally mercantile. They don't make the rules- they're just responding to demand.

Even more than the drinking culture, the academic culture in South Korea is very easy to make stupid generalizations about even if it's obvious to anyone who's made a serious effort to examine these lecture circuits that there are a lot of subtleties that go far beyond the Korean emphasis on education. Every single person in this process has a very different story to tell. And in every case, it's not the learning or teaching that matters- it's what they plan to do with this information in the long run.

But as of yet "the long run" pretty much consists of sneaking away to drink alcohol either alone or (less successfully) in a group, so it's hard to get a handle on any real character arcs in "Drinking Alone" just yet. For now, this doesn't bother me so much, because "Let's Eat" too managed that same balancing act of being more about real life than narrative story arcs. Even so, I don't quite have a full handle on this drama.