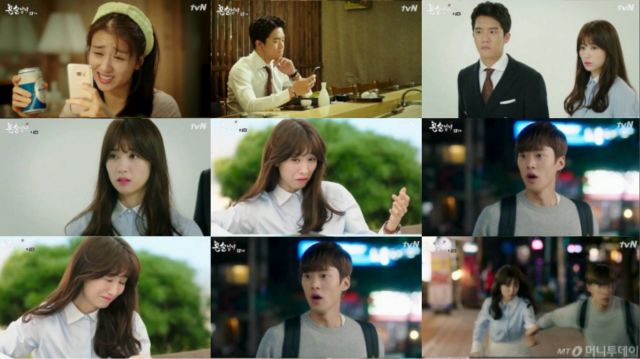 A harder turn toward serious romance this episode sours me somewhat on "Drinking Alone". It's mainly an issue of Jeong-seok being too ridiculously passive to be plausible as a romantic lead. What's more, Ha-na is such a cipher I'm actually hard-pressed to see why Jeong-seok should like her romantically at all. Now, Myeong, he has a very good reason to like Ha-na. She's his teacher. What more reason does he need?

That remains one of the more interesting elements in "Drinking Alone", the way it explicitly shows off that smartness is also sexiness. Jin-i continues to fascinate me because while the woman is very intelligent, she is self-conscious about it the same way a more typically vain woman would be self-conscious about her personal appearance. The whole photo shoot is a great exploration of Jin-i's character where she reacts emotionally and irrationally to a suggestion that was made for mundane technical reasons.

I'm disappointed that we don't get to see more of Jin-i in general, really. The best "Drinking Alone" moment this episode comes from Jin-i having a drink by herself when it's obvious that this isn't what she wants to do. It's easy to feel sorry for Jin-i because the woman's smart, and gorgeous, so why is it that she has such a lousy boyfriend? Where do these guys come from and how do they get such hot girlfriends? It just seems criminal, you know?

Gi-beom, by contrast, is not at all sympathetic, as his side of the plot this episode consists of the guy getting embroiled in a very pointless and petty online confrontation. That he does all this while wearing that ridiculous red track suit doesn't help matters. Isn't he supposed to be studying anyway? Although I suppose that is part of the point- no one in this drama studies because they actually want to learn anything. They just want the qualification necessary for a decent job, so it's easy to get distracted.

That kind of social commentary is far and away the best part of of "Drinking Alone". It's the whole reason so many of these characters are "Drinking Alone" in the first place, and has Ha-na demonstrates, there's another group activity people do alone just as a form of general stress relief. All of this is legitimately interesting, new material, such that I have trouble getting excited about the plot turning into a bog standard romance.