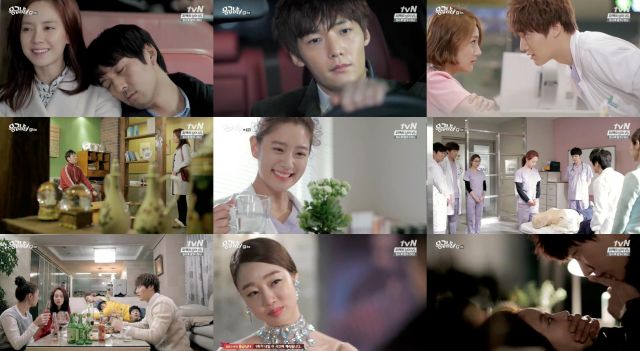 The drama appears to have finally settled on a consistent tone- light romantic comedy drama. The emphasis is now on how Jin-hee and Chang-min react to specific, clearly defined situations rather than their just generally overreacting to everything. "Emergency Couple" is now actively pushing the Jin-hee / Cheon-soo loveline, and the tonal shift is coming at the best possible time. The romance simply wouldn't be plausible if Jin-hee was acting the same way she did in previous episodes. Here the scenes, and the related flashbacks to scenes in previous episodes, come off as cute.

There's a great moment this time where all the interns are just hanging out, and the conversation takes a rather perplexing turn as Jin-hee and Chang-min make statements that passively-aggressively contradict each other in weirdly specific ways. This is the first time the drama's actually done something good with the secret past marriage subplot- by turning it into a source for jokes rather than pushing the characterization. Part of the reason for this is just how subtle the jabs are. The other interns know something's up but they're not sure what.

This low key humor tends to work better here than the more explicit low-brow stuff, to the point that the hospital is now finally plausible as a place where professionals operate. There's more casual doctoring, and more actual training of the interns. As a whole "Emergency Couple" just has a lot more restraint, even for characters not working in the hospital, and that makes it much easier to engage with the storyline.

However, this does bring up another problem. Now that the bombastic theatrics are gone, not a whole lot of interesting stuff is actually happening. The closest we get to a worthwhile plot hook is piecemeal progress on what Jin-hee's sister has been up to. And this ends up with a plot hook for the next episode that's not...well, it's not bad really. Just doesn't inspire a great deal of confidence.

Regardless, there are still some good positives going on here. We finally get a flashback from several years ago. Not with the characters or regarding a scene that I would have preferred, but still. "Emergency Couple" has had lots of problems in the context department. But it's getting better. The characters are acting more like grown-ups, and their motivation in the present day is more clearly defined. This is a narrative I can work with- hopefully the drama can continue moving along this track.