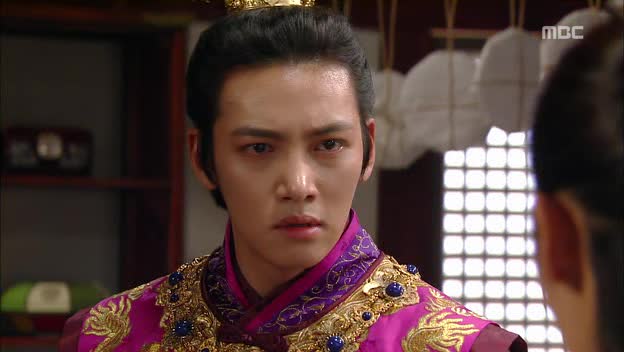 The parallels in "Empress ki" are clever, fun to follow and enhance the rest of the drama. The big parallel this episode was the political battle between the royal Yuan women and the physical battle on the Silk Road between Wang Yoo, Bayan and the Turks.

The battle over the Silk Road allows Wang Yoo and his men to shine and prove their mettle. It also allows for some great character development to happen. One of my favorite characters explored in this war setting is Wang Yoo's eunuch, Bang Sin-woo (Lee Moon-sik), who seemed at first to play the typical sidekick: silly, rather dull and solely a source of comic relief. But Eunuch Bang is more than a funny man. He is clever, talented and a genuinely useful person on Wang Yoo's side.

Wang Yoo hasn't been developed much, but he's in a wartime situation that requires one goal: survive and win. He uses Seung-nyang's memory to motivate himself and that is all. It's actually not necessary for him to be developed much at this point in time because of the situation he is in. The war he is waging is developing rapidly enough to keep the entire scenario interesting.

Ta-hwan, on the other hand, is going through worlds of change spurred by the process of being in love with Seung-nyang and by being trapped by his position as the pawn emperor. His love is his escape from his miserable life. As he slowly realizes she has deceived him, he becomes painfully disillusioned. Ji Chang-wook is absolutely heartbreaking as the childlike man, Ta-hwan as he vascilates between the blissful happiness of being in love and the heartbreak felt when the object of his affection falls short of his ideal image of her. Especially when he continues to convince himself that she is a man. The question becomes, "What will Ta-hwan do now that he no longer has his love to use as an escape from the brutal political arena inside which he is a pawn?"

The women in his life are not making things any easier on him. His step mother, the dowager empress; his wife, Tanasiri, the brutal empress; even the maid servants in his palace, they all are involved in the political game that is just another side of power struggle fought by Wang Yoo, Bayan and the Turks. Seung-nyang is not exempt from battle as her skills and toughness earn her the attentions of Empress Tanasiri and a role in her evil plans to make Ta-hwan's concubine lose the royal heir she bears. These women do not wield swords or bows, but they do wield influence, cunning, poison and greed. They battle as direly as the men do on the field. A royal heir means political power for the dowager empress' faction and a heavy blow to Empress Tanasiri's.

Watching the players interact with each other, use each other, rely on each other, and hurt each other is an absolute delight in "Empress ki". The beauty of the show remains consistent. It is also aurally very pleasing. The dialogue doesn't get too cheesy or screechy. The background music takes on an air of Chopin during the more pensive moments and the beauties of Ta-hwan's palace continued to be tastefully shown off. It's safe to say this show is one of the strongest currently airing.